Jose Calderon: All About the Team 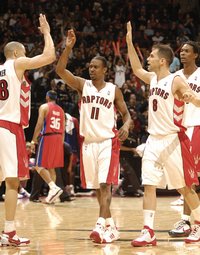 There’s a reason why Jose Calderon is one of the most popular players in the Toronto Raptors’ locker room, and one of the better-liked guys around the League. There’s no ego or pretension with him; dude is all about winning.

Case in point: Last night, he finally convinced coach Sam Mitchell to bring him off the bench, and let TJ Ford start in his place. Even with big dollars at stake in the free agent market this summer, Jose felt this was the best option for the team.

“We’ve been struggling and talking a lot about what we can do to get better. I always put my team first and I was talking to [Sam] and said let’s try to change to lineup again and see if we can make something happen.”

“I have an ego, but my team is first. I work for the Raptors and I play for the Raptors, I don’t play for Jose Calderon. What I want is to be in the playoffs, I want to have a chance to play in the second round, so I don’t try to be 20 points a game or something like that. I think this is a good idea to change everything so this is something I have to do.”

The move turned out to be the right one, as Toronto took down Detroit with relative ease.

Somehow, I don’t see too many other players around the League making a similar request to Jose’s anytime soon.