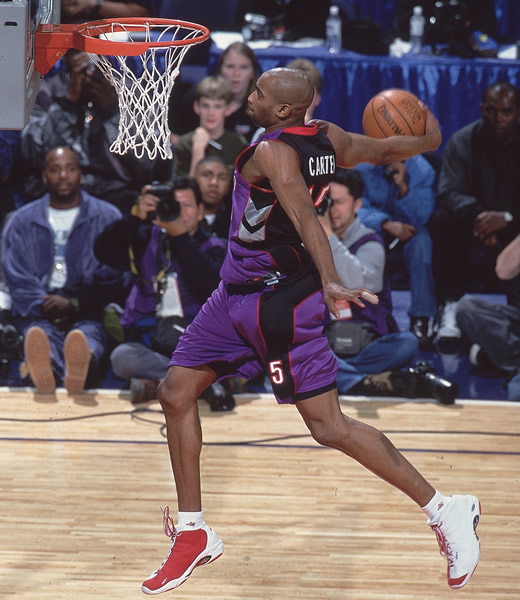 Wait, what? Kobe and Vince? As judges in the dunk contest? This is a cruel, terrible joke, right?

Afraid not. It seems that while these guys may be too cool to dunk, they have no issue judging those without enough superstar swag to shun the mid-season event. No wonder the contest has turned to crap.

And it’s not like these guys are geezers either; while Kobe’s dunk title (in 1997) wasn’t exactly the stuff of legend, he still gets up and throws down with the best of them (case in point: the two-handed 360 and Jordan-esque leaner in Washington against the Wiz this weekend.) As for Vince, he may no longer be Half-Man Half-Amazing, but he’s still pretty fucking amazing when he decides to take off.

Here’s what I don’t get: The NBA can force its players to alter the way they dress; it can get them to only address the referees after having politely raised their hands like good students; and might even start telling them which clubs to hit after the game; but can’t get its biggest stars to participate in what used to be one of the League’s markee events.

Something doesn’t add up here. As far as I know, no one has ever gotten hurt during the dunk contest (in fact, the only person I can recall seeing get hurt while dunking is Tony Allen), and a superstar of Kobe and Vince’s caliber participating in the dunk contest would benefit both the League and the fans greatly.

While I understand that some of these guys don’t want to have the label of “just a dunker” attached to them, and some are genuinely afraid of being shown up on such a big stage, shouldn’t the interests of the League and its fans come before the fragile egos of the players? Call me crazy.