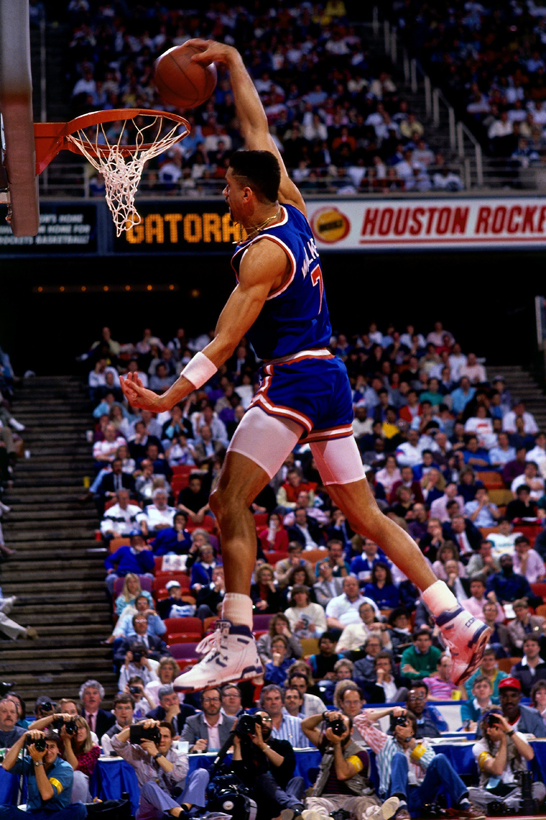 During the prime of his career, Kenny “Sky” Walker got high. Not in the narcotic sense, but in the vertical leap sense. Before injuries ended his NBA career, Walker beat out Clyde Drexler and Spud Webb to win the last Dunk Contest of the 80s (see below). Though his on-court days ended abruptly, “Sky” Walker never lost his rep.

Walker was drafted fifth overall by the Knicks in 1986. He spent five years in New York before heading overseas and then ending his NBA career with the then-Washington Bullets in 1995. Known for his “high-top fade” and “Gumby” style haircuts, Walker was considered one of the elite leapers of his day.

SLAM spoke to Walker as he signed autographs in Union Square as part of KIA’s 2008-2009 NBA TIP-OFF event.

SLAM: What’s been keeping you busy since your playing career ended?
Kenny “Sky” Walker: I’ve been hanging out in Lexington, Ky. and doing a few radio shows. I’m covering football and doing some pre-game and post-game stuff with basketball stuff for the University of Kentucky, so that’s been great.

SLAM: Sounds like playing at UK was a big part of your life.
KW: It’s the tradition and the fan support. When you think of college basketball and a few schools come to mind: North Carolina, Indiana, Duke and I would think you’d have to put Kentucky right in there with all of those great schools and the great traditions. I think that’s what make’s it so special to me is the fans and the tradition.

SLAM: Talk a little bit about that 1989 Dunk Contest for those who were still young yet.
KW: (Hard laugh) To take ’em back to the high-top fade days. Patrick Ewing, who is a very good friend of mine, and obviously I played with him for a few years in New York, used to watch me dunk in practice. I have to give him all of the credit for me going to the Dunk Contest. He convinced me to go out.

I lost my father a couple of days before the contest, and I wasn’t for sure if I was going to go. Patrick, along with Mark Jackson, they were my biggest cheerleaders that day. Those guys saw what I could do in practice, and I’m so glad that they encouraged me to get out there and show the world what I could do. It is still to this day probably the biggest thing that I’ve done as far as the NBA is concerned. I’m still known for it to this day.

SLAM: Being a former Dunk Champion, who is your favorite dunker to watch now?
KW: Right now, in the NBA, you’ve got some pretty good ones. I would say, as far as dunking in games, I’d have to go with LeBron or Kobe. But the show that Dwight Howard put on at the last NBA Dunk Contest was really great. I didn’t think anything would come close to the show that Vince Carter put on a few years back now. I admired what Dwight did in the contest because he did things that we never saw before.

SLAM: You still dunking the ball?

KW: Yeah, I can still dunk it. I can’t do it with the flair and the creativity that I once did, but I can still get up and thrown it down. I think that’s pretty good being a 44-year-old guy.

SLAM: Was the 1989-90 Knicks the best team you ever played on?
KW: That team was pretty good. My first couple of seasons with the Knicks were a struggle, but we had built a good foundation with Patrick Ewing, Charles Oakley, Mark Jackson, Rod Strickland, Trent Tucker, Gerald Wilkins and Johnny Newman. (Laughs) Rick Pitino really came in and turned it around for us and really showed us some direction. That was a very fun team. We had good shooters, good athletes and good big guys. It was probably the best of the glory days or the last time that the Knicks were really, really good, so that’s why I was excited and proud to be a part of that team.

SLAM: You flourished in the Rick Pitino era as Knicks bench boss.
KW: Pitino’s style of ball had worked very well in college. We didn’t know if it would work in the NBA, and it took us a long time to grasp that system. But he proved that once we bought into that system that it’s a great style of play. We had a great point guard and great big men with all the other intangibles to go along with that so I enjoyed playing in it. It was probably a little bit more effectively on the college level but I certainly enjoyed playing in it here in New York. I think the New York fans really liked it.

SLAM: You played in Spain and Japan later in your pro career; can you talk about what you remember about basketball in those two places?
KW: I think the Europeans have obviously caught up a lot from when I played over there. Because of the Olympics and our guys going to play overseas right now in places like Japan and Asia, it’s a little more competitive. I would say that it was a great experience for me. I was 27-years-old going over there, and I think the in Europe the Italian and Spanish leagues are very good. I look forward to the next couple of the years because we’ve been stealing so many of the European guys over the last couple years, and now you’re starting to see the mid-level NBA guys going are starting to go over to different countries and play over there. Overall, I think it’s good for basketball. It’s an international game.

SLAM: Did you know Patrick Ewing Jr. and were you sad to see the Knicks cut him from the final roster?
KW: I remember him from when he was a little kid running around at practice. I followed his college career. It was always really tough for him having that Patrick Ewing name and being compared to his old man, but he’s a hardworking kid who probably got the most out of his talent. It probably wasn’t a popular move as far as a lot of the fans were concerned. But from a basketball sense, D’Antoni’s system needs a shooter, so it made sense for that reason. Let’s see how it goes, hopefully he’ll get a chance to come back and finish what he started.

SLAM: Do you feel like you could have played a few more years in the League?
KW: I think so. Obviously timing is the crucial thing, I think as I got towards my last couple of years with the Knicks I developed some injuries that took away from some of the things that I could have done. Any time that you play one year, two years or three years in the NBA it’s a blessing, and I had seven years in the NBA. Could it have been better? Absolutely. But I’m not going to sit here and cry over what I could have accomplished because it was a dream come true for me–as well as any athlete that gets to–to play in the NBA. Do I wish I could have done more? Sure. But I’m happy with what I was able to accomplish.