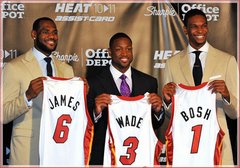 Every few years, a great team gets put together, and people get understandably excited about said team’s potential. And then, inevitably, those same people go a little too far with their excitement, and begin to predict immortality for that squad.

Last season, the Celtics’ newest employee went overboard with the prediction game. This year, it’s the Miami Heat’s turn to face what some (read: yours truly) would consider wholly unrealistic expectations.

Here’s Jeff Van Gundy saying the type of stuff that you just know has Michael Jordan and a host of former greats ready to come out of retirement again, and do something absolutely horrible to him.

From the Miami Herald:

The Heat not only will be great, but historically great. So predicts the co-lead NBA analyst for ABC/ESPN.

“They will break the single-season win record [of 72],” Jeff Van Gundy said. “And I think they have a legit shot at the Lakers’ 33-game [winning] streak [in 1971-72], as well. And only the Lakers have even a remote shot at beating them in a playoff series. They will never lose two games in a row this year.”

“They have put together a much better roster than anybody could ever have expected,” Van Gundy added. “There is now no good way to defend them. They are unguardable. They are indefensible. They are just too good and have added so much shooting and are so versatile that they will score at will. And with Erik Spoelstra coaching, they will be in the top three defensive teams in the league, as well. The other 29 teams better hope the lockout gets moved up a year.”

“Team John Dillinger” had better be ready to live up to the hype. For it will be unrelenting.