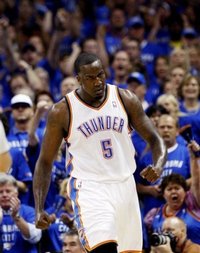 When Blake Griffin viciously dunked over Kendrick Perkins last week, it seemed that every NBA player with a Twitter account giddily posted their reaction to the amazing play. Kendrick Perkins, to his credit, took it all in stride.

Well, almost all of it.

LeBron James was just as excited about the Griffin dunk as anyone, which Perkins took offense to. Kendrick ripped LeBron in an interview with Yahoo! Sports last night:

Perkins respected Griffin for not making a spectacle of the dunk afterward or gloating about it. But he wasn’t too appreciative of LeBron James tweeting praise to Griffin. Several NBA players commented about the dunk on Twitter and in media interviews, but the only one that bothered Perkins was James. Shortly after the dunk, James tweeted, “Dunk of the Year! @blakegriffin just dunked on Kendrick Perkins so hard!!! Wow! I guess I’m No. 2 now. Move over #6.” James was referring to his alley-oop dunk he threw down after jumping over Chicago Bulls guard John Lucas III a day earlier.

“You don’t see Kobe [Bryant] tweeting,” Perkins said. “You don’t see Michael Jordan tweeting. If you’re an elite player, plays like that don’t excite you. At the end of the day, the guys who are playing for the right reasons who are trying to win championships are not worrying about one play. They also are not tweeting about themselves talking about going down to No. 2. I just feel [James] is always looking for attention and he wants the world to like him.”

Kendrick Perkins added that as a defender, he will never hesitate when he sees someone like Blake Griffin charging towards him. It’s his job to protect the rim, and if that means getting dunked on and humiliated from time to time, then so be it.

Should the OKC Thunder and Miami Heat meet in this year’s NBA Finals, a tantalizing possibility in and of itself, this Kendrick Perkins/LeBron James beef would make for a fascinating subplot.