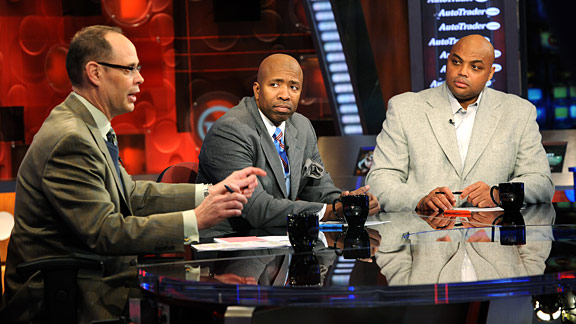 Kenny Smith truly is “The Man.” As an athlete, his resume includes NCAA First Team All-American honors, NBA lottery pick, and a 10-year professional career highlighted by back-to-back Championships with the Houston Rockets in the mid-’90s. As an analyst, The Jet is as real as they come. Backed by an immeasurable basketball acumen, Smith is a genuine, articulate voice who embraces explaining and defending his opinions and critiques, however dissenting they may be. To survive—let alone thrive—in never-ending debates with the unrelenting personalities of Charles Barkley and Shaquille O’Neal, you must be doing something right. And, as a parent, Smith is a dedicated father of three, supporting his children’s dreams and aspirations every step of the way.

So when I found out I’d be interviewing Kenny Smith, I was hyped. In the current era, where we have a surplus of basketball analysts and talking heads—many of whom, in my opinion, don’t contribute to advancing our knowledge and understanding of the game, and even some who I think are a detriment to viewer engagement—Smith is quite the breath of fresh air. Every Thursday night, regardless of what other games are on League Pass, my TV stays locked on channel 703 (Time Warner, y’all) with the volume noticeably turned up. Although TNT’s programming schedule is usually the most exciting anyway, listening to Ernie, Charles, Kenny and Shaq (and sometimes CWebb, who is so on point) go back and forth—either in playful banter or heated argument—is as enjoyable as watching the games themselves.

Throughout the NCAA Tournament, Smith did a bunch of exciting promotional work with Coke Zero, and our conversation begins there. We then digress, delving into a plethora of topics. Kenny dissects several draft prospects, the notorious “one and done” rule, explains the difference between analyzing college and NBA basketball, gives his take on Kevin Love vs. Blake Griffin, and much more. And yes, Kenny really did start the interview. When I called him, I was equal parts excited and nervous, but he just hopped on the phone and went in, quickly erasing any anxiety I had.

SLAM: Pretty good, Kenny. Thanks for taking the time to talk with us today.

SLAM: No doubt. Tell us a little about the promotional work you did with Coke Zero during the NCAA Tournament?

Kenny: Well, I was just helping spread the word about Coke Zero’s “Enjoy More Madness” interactive game. So basically, when you are watching the games on CBS, Turner and March Madness Live, key words would flash across the screen, and all you had to do is text to win. You can win prizes like tickets to next year’s Final Four, home entertainment systems, basketball camps and much more. I was promoting fan engagement in basketball and the NCAA Tournament. You’re watching the game anyway, so all you have to do is see the key words and text. You’re in a contest without doing anything, really.

SLAM: Nice. Now onto some basketball-related stuff. Let’s go back to your high school days. You were born in Queens, NY, and went to Arch Bishop Molloy High School where you played for legendary coach Jack Curran, who’s won more high school games than any coach ever. I don’t know if people usually ask you about him, but I just want to you to shed some thoughts on Jack Curran.

Kenny: Ah, Coach Curran, my guy . There’s nothing at Archbishop Molloy that I did, that when I got to college or the NBA, I hadn’t seen. Coach Curran prepared me so well for every basketball drill, every situation, every thought process, every kind of terminology. Everything he taught me was the foundation of my basketball career. I’m so indebted to that guy it’s crazy.

SLAM: You played your college ball at North Carolina. As an analyst, is it tough to repress your personal emotions when you watch UNC? Can you really sit there with a straight face and provide objective analysis?

Kenny: [Laughs] I’m never objective, I’m always just rooting every time. You know, I just feel that’s like a fraternity. So definitely, I root, and I say ‘we’, and I don’t say ‘them’.

SLAM: In that case, it must have been tough to see your squad go down, especially because they were without Kendall Marshal. I know hindsight is 20/20, but just for conversation sake, do you think the UNC-Kansas game would’ve played out differently if Marshall played?

Kenny: If he played, I thought they would’ve won. I think that overall, Kentucky and North Carolina were the two teams that, talent-wise and cohesion-wise, were playing the best basketball. So I thought that both of them would have gotten to the Final Four. So yeah, if Marshall didn’t go down, we would’ve seen them in New Orleans.

Kenny: Well I think the one thing you have to do is just be, you know, in tune. It’s impossible to watch 68 teams that get invited, but you have to be in tune with what’s going on. And then once the tournament starts, my job is to analyze specific games, and create those trends, not always what trends have been made because a lot of teams are making new trends once the tournament starts. You know, they get hot in the tournament—like a Louisville just did—you know what I mean? So they don’t have or require the same kind of critique that they would have during the regular season. So, in essence, my job doesn’t change—this is the same job I have in the NBA. I analyze the trends as they come, and in the Playoffs they are different.

SLAM: At this point in your broadcasting career, you’ve kind of transcended some boundaries and are certainly doing it your way and in your own style. What would you say to the people that are like “Yo, why are Kenny and Charles analyzing the NCAA Tournament when they’re NBA guys? They don’t know college basketball.” What would you say to those criticisms, to the people that don’t think you’re adequately qualified or in tune?

Kenny: Let me put it this way: There’s nothing that’s going to happen in a basketball game that Charles and myself haven’t seen, heard, been part of or done. Between the two of us, there’s nothing. Absolutely nothing could ever happen in a game that we haven’t done. Or seen or been a part of. So, you know, that’s our background. For the nonbeliever, what else do you need? For the nonbeliever, the same person who’s saying that can’t say what I just said.

SLAM: I hear you. Was that question out of line?

Kenny: No no, certainly not out of line. I’ve heard it, I’ve heard it before you know, last year. This year, not as much. After last year, people are like “wow, those guys actually get it done.” And I think last year there was a lot of noise and speculation because a lot of guys that have been calling college games didn’t get the opportunity, and they may have felt slighted. And so we kind of came in and did a good job, and now I think the ill feelings are gone, so we didn’t hear it at all this year.

SLAM: Let me ask you about a few of these NBA Draft prospects you’ve been watching. Let’s start with Anthony Davis. What have you seen from him?

Kenny: He reminds me of Marcus Camby with a better offensive game. You know, he does a lot of the same things. Some people would say Tim Duncan, but I wouldn’t because I think Anthony is a little more defensive oriented than Tim was. Tim was a much better offensive player. But he’s somewhere in-between Marcus and Tim, in terms of his potential. Now potential is a dangerous word. There’s a lot of things that still need to come into play to finish it out and execute the plan. But all of those things are right there.

SLAM: What about Thomas Robinson and Jared Sullinger? Do you think they could make an impact in the pros? A lot of pundits say Robinson is too small to play power forward and Sullinger is too slow. Thoughts?

SLAM: What about Harrison Barnes? Everybody’s getting on him now, saying he hasn’t lived up to expectations. Do you think the critics have been unfair on Barnes, or do you think expectations were set too high? Or do you think it’s too early to tell what this kid will become?

Kenny: I don’t think it’s too early to tell. We’ve kind of seen what his strengths are, we’ve seen some of the weaknesses. One thing he has to do is know that he has weaknesses, and work on them between now and the draft and training camp, and make some of those weaknesses less relevant. Because his strengths easily overpower his weaknesses. He has an opportunity to be a great player.

SLAM: So maybe he’s be a great scorer, but when he came into college, he was lauded as like, “Harrison Barnes: the next big thing.” But now it’s like, “Oh, Harrison Barnes? He might be a lottery pick, but we don’t know how good he’ll be.”

Kenny: Well, there’s been a lot of “next big things” that didn’t pan out, and there’s been some guys who weren’t thought of as highly who’ve turned out great (laughs). It’s your work ethic, that’s really all it is.

SLAM: The last prospect I’m gonna ask you about is Perry Jones from Baylor. A lot of people are also getting on him because he had a very disappointing NCAA Tournament, but you know, he’s a projected top-5 pick. Have you watched Perry at all? And if so, what’re your thoughts? I can’t figure him out, so I’m hoping you can.

Kenny: I think he’s a really great talented player, but you know, when you look at 18-year-old or 19-year-old kids, they’re not complete. They’re still in the oven, but everybody wants them to microwave. You can’t microwave when you’re that young. You can microwave when you’re 30, because all you have to do is change a couple of things, but when you’re baking, like these guys are, you’re gonna have weaknesses at times. And you know, all the great things we see, sometimes we get blinded and take it for granted. It’s not his fault that we get blinded.