Kevin Durant Commits to Playing in the 2016 Olympics 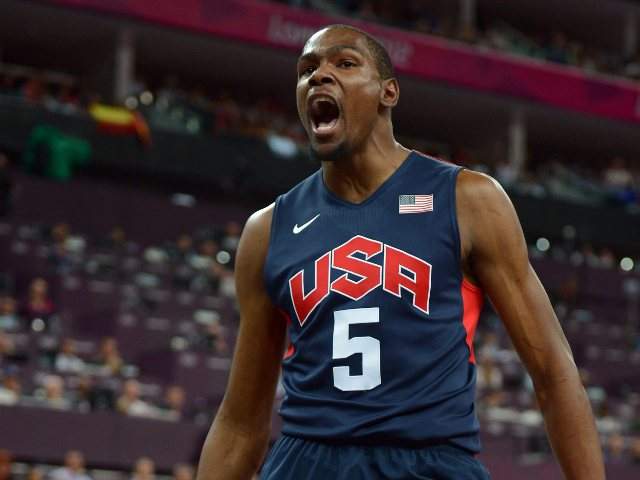 If USA Basketball will have him, Kevin Durant says he wants to play in the 2016 Olympic Games.

Durant, a member of the gold medal-winning 2012 squad, raised eyebrows with a last-minute withdrawal this summer from the Team USA program.

LeBron James, on the other hand, remains undecided about his participation in the ’16 Games.

“Hopefully I’ll be there. It’s whoever Mr. [Jerry] Colangelo and Coach K [Team USA coach Mike Krzyzewski] pick,” Durant said. “I would love to have the chance to play in another Olympics.”

James said after the Cavaliers’ practice in Cleveland he’s “nowhere near” deciding if he’ll again play for Team USA in two years. […] “I haven’t even thought about it too much. I haven’t decided,” James said.

“I was tired,” Durant said about pulling out of the FIBA Basketball World Cup. “I just wanted to have some time to just enjoy my summer and continue to work on my game but just enjoy my summer. Coach K and Mr. Colangelo understood and they made this whole thing easy for me. […] The thing I didn’t want to happen was for it to overshadow what those guys were doing because they deserved to be in their moment. I was so excited for them, especially the newer guys that hadn’t played in international competition before. It felt like four years ago when we were playing in 2010 and had all the young guys. That’s what their team looked like, so I was excited they got the W [in the tournament in Spain].”