The Future Has Arrived 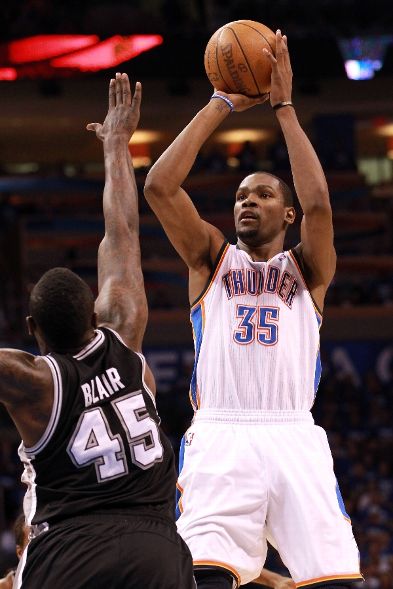 “I want to be one of the greatest players of all time. I want to be remembered.” —Kevin Durant

Six minutes and 33 seconds remained in Game 4 of the Western Conference Finals between San Antonio and Oklahoma City. The Thunder held a steady lead all game long to this point, but the Spurs were beginning to look as though they had the cojones to pull off a comeback on the road at Chesapeake Energy Arena during a decisive stretch of the series.

Then, in the blink of an eye, there was nothing a single player on the Spurs could do to stop No. 35 in white.

The script for the next five minutes and 19 seconds of game time (6:33 to 1:04) read a little something like this for KD:

– 17-foot jumper from the right elbow goes down
– Three dribble pull-up in the middle of the lane, as he carried to the left, plus the foul
– Perfectly executed two-dribble spin-move, followed by a 9-foot jimmy in the paint over a helpless Tony Parker
– Stephen Jackson overplays Durant (thinking he is going to cut up to the top of the key AKA his favorite spot to catch the ball on the floor) and Durant scores his easiest deuce of the night, assisted by the James Harden
– Free throw, then a 17-footer off of a curl, once again assisted by the bearded bandit
– James Harden 3-pointer, thanks, of course, to Kevin Durant probing the defense and finding the open man

After a quiet, four shot first half in which Serge Ibaka and Kendrick Perkins dominated the game, Kevin Durant asserted himself to the tune of 16 points in a row, 18 of the Thunder’s final 23, and jaded any opportunity the Spurs had to make a comeback.

Awe-inspiring, game-winning tear-drop/runner/jumper against Dallas in the opening game of the playoffs from 17-feet? No problem.

Take over during the most crucial stretch of OKC’s season thus far in the Western Conference Finals vs. the Larry O’Brien trophy favorite San Antonio Spurs? Durant made it look like a cakewalk.

As we take in these awe-inspiring, breath-stealing moments—as basketball fans—it’s important that we keep perspective on the players that we’re watching. Midway through his college season at the University of Texas, Durant proved that he had an offensive repertoire most NBA veterans could only dream of having. The long and lanky 19-year old perimeter scorer was garnering comparisons to some of the game’s most versatile big men. The ever-so-popular Dick Vitale often compared him to perennial NBA All-Stars Kevin Garnett and Dirk Nowitzki, while using phrases like “most prolific offensive skilled perimeter” he’d ever seen.

“With a versatile player, there’s no spot on the court you can’t pass him the ball. You can do anything.” —Durant

Durant, though, has taken every moment of his career in stride: He has regularly downplayed his importance while uplifting his teammates. He’s learned from the failures he’s encountered—the 20-62 rookie year in Seattle (2007-08), the 23-59 record during the first season in OKC (2008-09), his team’s first round exit to the Lakers (2010-11), and last year’s heartbreaking loss in the Western Conference Finals to the eventual NBA Champ Dallas Mavericks—all while constantly improving his understanding and knowledge of the game, perpetually adding to his seemingly never-ending bag of diverse and versatile offensive moves, reading the defense with precision and with more and more and more consistency.

“I’ve learned what it feels like to lose, believe me. But I think, in the end, that is just going to make winning that much better.” —Durant

Most importantly, Durant has learned that he has to have the basketball in his hands when his team needs him most, and that is exactly what we saw take place once again Saturday night in Oklahoma City. Time and again, Durant made it a point that he and his young, giddy-up Thunder squad aren’t going down without having a chance of their own. Instead of shying away from the ball, failing to get open, failing to get shots off down the stretch of the game—such was the case as recently as Game 1 in this series—Durant wouldn’t, couldn’t, be denied.

The patience he exuded in this game was utterly phenomenal. The League’s three-time consecutive leading scorer had taken only four shots before intermission, knocking home his first bucket a few minutes before the break. Durant and his team’s willingness to utilize the (offensively underrated and outshined) Serge Ibaka to near perfection (11-11, 26 points) helped to carve the Spurs defense up to a T.

The Thunder went into halftime and made a few subtle wrinkles to their go-to play: The weak-side down-screen that encourages Durant to catch the ball near the top of the key. Once there with room to operate, Durant is in control. The beauty of the Thunder shines through, because KD gets to figure out what the right play is at the right time, and he’s smart and unselfish enough to try to do what’s best for the team. All of the experiences he’s been part of are playing their part in the success that he and his teammates are trying to build, down in the heartland.

OKC certainly isn’t out of the woods yet; they have to win two of the next three games, two of them on the road. If anything is certain, though, it’s that the Thunders’ star player is going to show up in a big way during these last games of the series. He’s probably going to read the defense with precision and make plays. Hopefully, he’s going to fight to get open when it matters most. He might even knock down another clutch shot…

Just don’t forget that the ultimate key to Kevin Durant’s development lies within: The lanky and gangly kid who couldn’t bench 185 pounds at the NBA Draft Combine just five years ago wants to do nothing but improve.

Kevin Durant just wants to be one of the greatest to ever play this game. And if the 23-year old’s learning curve continues, it’s safe to say that he will have made his dreams into an ever-lasting reality.

FLASHBACK: See the video below to remember the player KD was coming out of college.