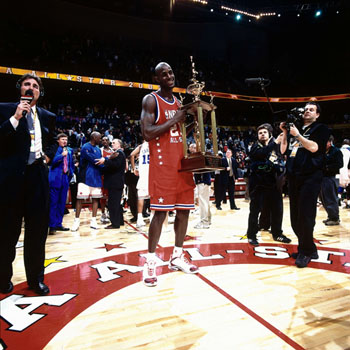 KG was masterful against the so-called unbeatable Suns last night. In honor of his performance, here is an exclusive look at what he told SLAM’s intern Konate Primus for this month’s Backboard.

As he prepares for his 10th(!) All-Star Game, young-at-heart veteran Kevin Garnett reflects on the NBA’s signature weekend.

I just found out it looks like I’ll be starting the All-Star Game for the West. That’s a real honor since it’s the people’s choice. I love All-Star Weekend. My 10th All-Star Game should be special, but I don’t know if it will compare to my very first All-Star Weekend in San Antonio when I played in the Rookie Game. I had met Michael Jordan probably only one time before that weekend, and when he got off the elevator, you would’ve thought a bomb went off the way all hell broke loose. Shaquille got off first, five minutes later Magic got off and then 10 minutes later Jordan got off, and it was crazy! We were sitting in the lobby and it was like a bomb went off!

Madison Square Garden in ’98 was crazy when I threw Kobe the lob from God and he went up and got it. Just bananas!
Fast-forward to Atlanta in ’03, which was Mike’s last All-Star Game. Pretty close to home for me and pretty close to home for him. It was crazy because I found myself not sitting in the lobby but a couple of levels up and first Worthy got off the elevator, five minutes later Magic got off, and—no bullshitting—10 minutes later Jordan got off! You would think the same bomb went off! That was the All Star Game when I got MVP. It was incredible. It felt like one of those moments where time stood still, when you’re in the groove, guys are looking for you, you’re feeling the energy in the building. I felt like I was at home, knowing I was just an hour away and it was a good feeling. I never thought about anything; I took all the shots that were there, I was aggressive and we went into double OT. That was Jordan’s last All-Star Game, and a part of me wanted to show my respects since he made it a show with that shot over Marion to go to OT. He definitely made it worth the price of admission!

Then there’s practice! Ah, yes, practice on that Saturday morning is something I look forward to. That’s when they take us out so we can see the new gadgets like the new iPods, PS3s or whatever. It’s the stuff that won’t be out ’til probably 2010. They break ’em out and let us play with ’em for a li’l bit. The practice in itself is pretty serious, but the gadget meeting is the best! We don’t get to keep that stuff, but if you got a li’l hustle in your talk then you could probably work something out. But you can’t let too many people know for promotional and technology reasons. Besides, if you get it now, the games aren’t even out so it’s just like, “Ha ha, I got one,” but you can’t play it.

For more on Kevin Garnett, pick up SLAM 106.