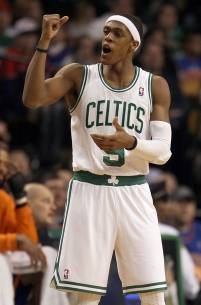 Rondo’s silly line — which was Wilt Chamberlain-esque — of 18 points, 20 assists and 17 rebounds (a career high) ignited the Celtics, and according to teammate Kevin Garnett, Rajon is using the trade talk as a motivating factor.

From the Boston Herald:

“Rondo’s line is one that I haven’t seen since I’ve been in the league,” said Garnett, a 17-year veteran. “Very, very impressive. I had to come in here and give him some real (praise) after that. I saved the (box score). Just as a witness that I was here and I actually got to see this up front and center.” According to Garnett, the performance wasn’t a total surprise. A nationally televised matchup with much-hyped Knicks point guard Jeremy Lin amid the swirling trade rumors is a recipe for a monster game from Rondo, who has 17 career triple-doubles.

“The thing about Lin is I think everybody who’s at the point guard position is going to be excited to play the kid,” Garnett said. “(Rondo) was nothing short of that today. I could see it. I could tell. I’ve been around him to know when he’s motivated and when he’s more than motivated. Tonight was one of those nights.” Surely, [Danny] Ainge would love to borrow Garnett’s superpower. As Ainge charts the franchise’s future he must determine whether to keep the uniquely talented Rondo as the centerpiece or trade him for a more stable presence. “The trade talks really is a good motivating factor for him,” Garnett said. “If you know Rondo, he’s an I’ll-show-you type of person.”

Paul Pierce has tried to comfort his point guard by telling him that he also been the subject of trade chatter for a number of years in the past, and that you can’t let that affect your play negatively.

To his credit, Rajon Rondo has taken the incessant trade rumors in stride — publicly anyway — choosing to let his play on the court do the talking for him.