Kevin Martin Got His Money 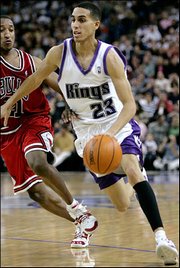 The rumor had been floating around for a few days, but now, it’s official: The Sacramento Kings have inked Kevin Martin to a five-year deal, making him the third-highest paid player on the team.

According to two league sources, fourth-year shooting guard Kevin Martin late Monday night agreed to a five-year contract extension with the Kings worth about $55 million.

Martin, whose breakout 2006-07 season will vault him into the upper pay ranks of NBA shooting guards, unexpectedly flew in from his training hub at the IMG Academies in Bradenton, Fla., and arrived in Sacramento on Monday in anticipation of signing his new contract. A news conference is expected this week to announce the deal.

K-Mart (surely we can come up with a better nickname for the man with the ultra-funky jumper), whose breakout season caught a lot of people by surprise (including yours truly), should give new coach Reggie Theus a solid scorer – Martin nearly doubled his scoring average by jumping from 10.8 ppg to 20.2 ppg last season – to build his offense around for the next few years.