Kidd Trade Very Much Back on the Table 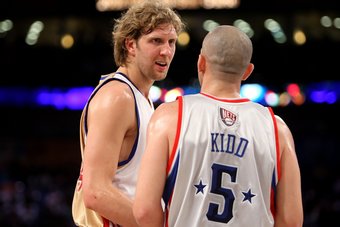 Once again, it appears that Jason Kidd is hours away from donning a Dallas Mavericks jersey. And as far as anyone knows, there’s nothing Devean George can do to stop it.

An NBA executive confirmed before Sunday’s All-Star Game that the deal had been finalized and probably will be submitted to the league office today for formal approval.

Mavericks owner Mark Cuban would only say: “It’s breathing, but not done.”

My favorite part of this deal – other than the fact that Rod Thorn absolutely fleeced a clearly desperate Mark Cuban – is Van Horn’s inclusion in the talks. Dude is basically getting $4 mil even though he hasn’t done a damn thing for the past two years, and all he has to do is pinkie swear that he’s serious about resuming his career.

The NBA: Where Free Money Happens.