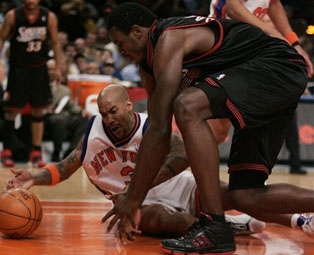 –The Knicks start out uncharacteristically all over the offensive glass.

–As the Knicks are about to re-enter after a timeout, Kelvin Cato gets in Eddy Curry’s ear about something game-related. Maybe Isiah is using him as his re-enforcer.

–Iverson is working really hard out there. He comes around a screen and catches the ball at the top of the wing, about to do something really exciting. Oh wait…

–Neither team is having any success guarding the other team’s big man.

–The Sixers go zone and get burned.

–After watching Andre Miller try and guard Stephon Marbury twice in the span of a month (once on the Nugs, once on the Sixers), it’s safe to say that he just can’t. Mo Cheeks, possibly trying to prove my point, immediately inserts Kevin Ollie into the game. Ollie begins applying a full court press on Steph.

–You’ve gotta love David Lee’s assist recognition: He lazily flails his left arm in the air, pointing in the general direction of the passer. This might rank in the NBA’s top 10 dorkiest idiosyncrasies, somewhere between Richard Jefferson’s voice and anything Chris Kaman does.

–Joe Smith wets a baseline jumper. Name one team besides the Nets that he could start for.

–Even though I remain adamant that the Knicks should trade him, Q stays hot.

–Why is it that 2-3 times a game Nate Robinson beats his man into the lane and tosses up a floater, as if he cannot see the 7 footer standing in his way?

–Eddy Curry gets called for a lazy foul. Ice Cube’s lyric, “I make dough, but don’t call me a dough boy,” immediately comes to mind for some reason. Call him dough boy, but call him a de-facto all-star, too. Maybe we can call him de-fact-dough?

–Worth noting: Philly lost to Detroit last night and traveled here. Meanwhile, the Knicks were at home either getting laid or eating cake.

–Bobby Jones enters. He used to pitch for the Mets. A very normal pitcher.

–The Sixers are allergic to defense.

–Rodney Carney and Alan Henderson are combining to redefine invincibility.

–Jay Mohr, sitting courtside, plants a fat kiss on the lips of his plastic-breasted babe. A source, choosing to remain anonymous, “Look at Jay Mohr; someone punch that motherfu**er.”

The Knicks win easily despite having fun with turnovers. Though, against the Sixers, you can have fun with turnovers and still win easy. Remind me to stay away from the Sixers for the rest of the season. They might be the least interesting basketball team I’ve ever seen. And they suck too!