Kobe Bryant Calls This the Best LA Clippers Team Ever 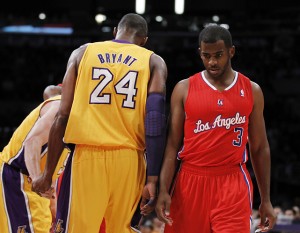 The best record in the NBA, 17 wins in a row, a perfect 16-0 mark in December, and an endless collection of highlight reel plays. Welcome to the new, incredible LA Clippers Experience.

The Lakers, who have reigned supreme forever in Los Angeles basketball, have certainly noticed the tear their neighbors are on, and they are indeed very impressed.

According to Kobe Bryant, this is the best Clipper team he has ever seen.

From the LA Times and ESPN:

Yep, the Clippers have arrived. Even the Lakers have to acknowledge them now. “We have to reckon with them. They’re kind of setting the bar where we’ve got to get to,” Lakers Coach Mike D’Antoni said.

“That’s extremely impressive to put together win streaks that are that long,” Kobe Bryant said. “It shows a lot of focus, it shows a lot of ability and a lot of depth because they can beat you multiple ways. They have a lot of guys that are just willing to play their roles … They’re very familiar with each other,” Bryant said. ” … It seems like they slapped a lot of talent together, which they did, but a lot of those guys have been together before.” […] When asked if the current Clippers team was the best he’s seen in his 17 seasons as a professional basketball player in L.A., Kobe Bryant replied: “I don’t think it’s a question about it.”

The season is still young, but what LA’s “other team” has accomplished up to this point is remarkable. Whether they are the best squad in franchise history, though, remains to be determined.

The Clippers’ winning streak will face its greatest challenge this week — Lob City travels to Denver and Golden State (for a tough back-to-back), followed by consecutive games against the Lakers and Warriors.