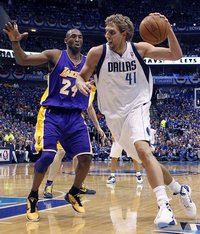 Dirk Nowitzki’s trademark one-legged fadeaway isn’t the prettiest thing in the world, but it sure is effective. In fact, it’s so good, that fellow NBA superstars have begun to slowly incorporate it into their own offensive arsenals.

Kobe Bryant was in a happy mood following the Lakers’ tough win in Dallas last night, and expanded on just how ugly Nowitzki’s signature shot is.

From the Dallas Morning News:

Standing in the visiting locker room at American Airlines Center, the Los Angeles Lakers superstar, who was held to 15 points on 4-of-15 shooting, was asked about a comment he made regarding his fadeaway jumper being “sexier” than the one belonging to Dirk Nowitzki. “He knows it’s true,” Bryant said with a smile.

“His shot’s ugly. It is. It looks terrible. Anybody in Dallas that says Dirk has a pretty fadeaway is lying through their teeth. It just looks disgusting. “But it’s extremely effective.”

Bryant voiced the original comment to the TNT broadcast team in the middle of a game against Portland on Monday night. “Dirk does it well, I do it better,” Bryant said after attempting the fadeaway. “Mine’s a little sexier.”

I’m not sure who shoots the “sexier” one-legged fadeaway between Kobe and Dirk, but I can tell you what is truly the ugliest thing we witnessed last night: the Lakers/Mavericks game.