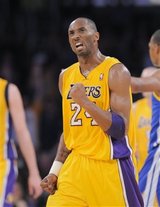 Everyone thought they saw the signs coming: Kobe Bryant’s numbers were headed downward, he was getting up there in age, his body racked by an endless amount of debilitating injuries, he had to deal with a new coach and system (which was supposed to begin tilting towards the team’s two big men), an uneven team, and there was even talk from some corners that LA was about to become a Clippers town.

Kobe Bryant’s gradual downfall seemed inevitable to all. All but Kobe Bryant, it seems.

The 33-year old future Hall of Famer turned the clock back last night against the Phoenix Suns, dropping in a season-high 48 points to lead the Los Angeles Lakers to their third straight win. Afterwards, Kobe took great delight in reminding the doubters just how wrong they have been about him.

Kobe Bryant wants you to say he can’t do it anymore. He’s too old. He’s played too many minutes. He’s too hurt. He shoots too much. After scoring an NBA season-high 48 points on 18 of 31 shooting in the Lakers’ 99-83 victory Tuesday over the Phoenix Suns, Bryant asked a reporter to tell him to his face he can’t consistently replicate such an effort through the rest of the Lakers’ (7-4) 55-game season. Even if he strung three 30-point plus games in the last four all on a torn ligament in his right wrist.

“Not bad for the seventh best player in the league,” Bryant said in a shot at the ranking a panel of ESPN writers gave him this offseason.

Kobe didn’t just have his critics in mind last night; the Black Mamba also let it be known that his long memory recalls the pain of past Playoff defeats at the hands of Phoenix: “I don’t like them,” Bryant said of the Suns. “Plain and simple, I do not like them. They used to whip us pretty good and used to let us know about it and I. Will. Not. Forget. That.” Even though most of the guys from that team are gone? “I. Don’t. Care,” Bryant said. “I won’t let it go.”

Kobe Bryant is now the League’s second-leading scorer at 29.5 points a game, and shooting 46% from the field.

Many still don’t consider the Lakers true title contenders this season, but Kobe is determined to prove us all wrong in that regard as well.