Kobe Bryant: ‘I Just Got One More Than Shaq’ 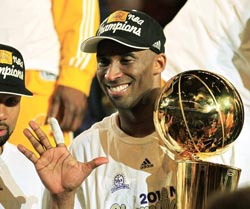 LOS ANGELES —Throughout the entire NBA Finals, Kobe Bryant refused to acknowledge the enormity of the moment. What it would mean for him and his franchise to avenge their loss to the Celtics in the ’08 title round, what the victory would do for his own legacy.

Bryant admitted that beating Boston for the ‘chip meant the world to him, and that getting his 5th title was especially sweet considering that his old nemesis, Shaquille O’Neal, only has 4.

I jotted down the quotes from the back-to-back NBA Finals MVP:

About the rivalry with the Celtics: “I was just lying to you guys. When you’re in the moment you have to suppress that because if you get caught up in the hype of it all, you don’t really play your best basketball. But I mean, you guys know what a student I am of the game. I know every series that the Lakers have played in.”

“I mean, I was just a Laker nut and I know every Celtics series, I know every statistic. It meant the world to me as well, but I couldn’t focus on that. I had to focus on playing.”

What this this title meant for him personally: “I just got one more than Shaq!” Bryant said happily. “You can take that to the bank … You guys know how I am. I don’t forget anything.”

Shaq — who told various media outlets that winning another title would make Kobe the greatest Laker ever — was quite gracious following the game, and offered warm congratulations to Bryant via Twitter.

@THE_REAL_SHAQ Congratulations Kobe, u deserve it. U played great. Enjoy it man enjoy it. I know what ur sayin "Shaq how my ass taste"

Something tells me, though, that O’Neal will have something less than friendly to say about Kobe openly gloating about surpassing him in the ring count.