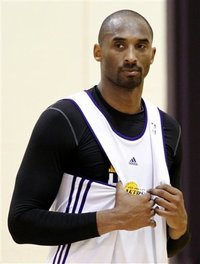 Many things went wrong for the Los Angeles Lakers last season, culminating in a humiliating sweep at the hands of the eventual NBA champion Dallas Mavericks. It’s hard to pinpoint precisely one thing that doomed the team, but a lot of blame can safely be placed on Kobe Bryant’s health. Or lack thereof.

Bryant used the extended offseason to get himself healthy, undergoing an innovative knee procedure in Germany, and he says that he’s never felt better physically.

In a wide-ranging Q&A with Yahoo! Sports, Kobe addresses a number of subjects surrounding Laker-land, including his health, new coach Mike Brown, trades and near-trades, and what he expects from the team in 2012:

Q: Do you see yourself retiring with the Lakers? There’s been speculation you might want a change. Bryant: “I don’t know where that comes from. I don’t have any feeling about [leaving] whatsoever.”

Q: So you definitely want to stay a Laker? Bryant: “Of course. No question. Why not? I’ve been here for 16 years. I’m going to up and leave now?” Q: Do you want to be one of those rare stars that played in only one place during a long NBA career? Bryant: “Oh yeah. That would be special. It’s rare to see that nowadays. It’s almost nearly impossible.”

Q: Can you talk about the surgical procedure you underwent on your right knee in Germany this summer and why you had it there? Bryant: “I’m not a big medicine, techie guy. But I know my knee feels 90 percent better. My understanding was that the guy who invented it … [Germany] is where he’s from and where his home base is. So I didn’t want to go someplace else where he had to move his equipment. If I am going to do it, I want to do it right and do it in the place where he is most comfortable doing it.” Q: What can you do physically with that knee that you couldn’t do at the end of last season? Bryant: “Anything I want. I can run. I can jump. I can run the track. I can lift weights the way I want to lift weights. I can practice every day. Those are things I couldn’t do last year.”

You should take time and read the entire thing.

Most people don’t consider the Lakers true title contenders going into this season — too old, disjointed, etc. — but Kobe Bryant’s belief in himself and the team (as presently constructed) seems unwaivering. That has to count for something, right?