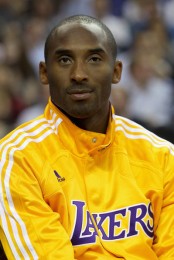 Kobe Bryant has talked about finishing out his basketball-playing days in Europe before. Bryant grew up in Italy, and speaks fluent Spanish and Italian. Bryant is also hugely popular internationally.

And now, as he enters the twilight of his NBA career, Kobe believes a year or two of hoops across the pond might be a fitting way to end things on the court.

“It would be natural for me to go do it. It wouldn’t be a stretch at all. I grew up here.” Bryant plans to play out the final two years of his Lakers contract and reassess everything. He’s still performing on an All-Star level, and his knees are holding up with his 34th birthday approaching this month. As the son of Italian League star Joe Bryant, he lived in Italy for several years as a child. His memories of Italy’s pro league plush, Bryant still gushes over witnessing the scoring genius of Brazilian star Oscar Schmidt in Italy.

“You’d have to look at the market and what’s going on in terms of the level of basketball being played,” Bryant said. “I understand there’s a high level of competitive basketball in Turkey now. They might have the best league in Europe. Spain has obviously been one of the top leagues for a long time. And Italy is a place that’s dear in my heart, I grew up there, but the level is not where it used to be. When I was growing up over there, that was the best league in Europe.”

You may recall that Kobe Bryant was in discussions with Virtus Bologna of the Italian League about temporarily playing for them during the NBA Lockout last summer, but those talks never went anywhere.

Once he hangs up his NBA jersey for good — a possibility two years from now — it’s not an entirely far-fetched idea to imagine Kobe returning to Europe for one final hoops adventure.