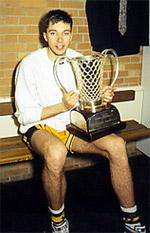 • Wow…very, very quietly, word sneaks out of Milwaukee that Toni Kukoc is done. He basically announced his retirement yesterday, saying he wanted to play for either Milwaukee or Chicago, and neither team wanted him, so…he’s just going to play golf. More on this story later…

• The Cavs finally agreed to a contract with Drew Gooden yesterday, signing him to a three-year deal worth $23 million. Funny, because I talked to some people who knew what was up with this deal a few weeks ago and was told that they were stuck haggling over a difference of $500,000, and neither side would budge because they felt it was a matter of principle. Looks like they decided to split it down the middle.
• For every strange move the Celtics make, they seem to pull a nice one to counteract it. Yesterday they signed Kendrick Perkins to a four-year deal for a very affordable $4 million a year.

• JJ Redick was sentenced to one year of unsupervised probation and a whopping 24 hours of community service in exchange for pleading guilty to DWI.

• Also, the Suns are giving Olowokandi a look.

• After getting rid of their other point guards, the Blazers are handing things over to Jarrett Jack.

• The Nets may have found a best-case scenario involving Josh Boone and his bum shoulder.
• The BETcats officially signed Fabio.