Threes Run in the Family 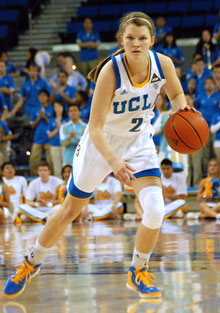 Last November, Pauley Pavilion was new. Fresh. Vibrant. Full of possibilities. The UCLA women’s basketball team ran on to the newly renovated court and began splitting into layup lines before tipoff of its season opener.

Some dribbled down the right side and finished with a reverse on the left. Others crossed over then double-clutched before tapping the backboard and putting the layup in. Then the rhythm changed.

Freshman Kari Korver was the only one to pull up for jumpers, inching farther back each turn. Her teammate, running parallel, often nodded with approval. There were no unnecessary moves, no long rebounds—just makes.

Then a few minutes later the 5-9 guard blended in with her teammates on the bench. After the referee tossed the ball into the air, Kari looked into the stands and spotted her cousin Kyle Korver, the 10-year NBA veteran and current guard for the Atlanta Hawks, who was in town for his team’s game against the Clippers the next day.

Knocking down three threes off the bench to finish with 11 points in 18 minutes of play in the team’s 66-52 win against San Diego State, Kari seemed to answer everyone’s question that night: Yes, the Korver family shooting gene is alive and well.

“Kari goes to UCLA, you know? That’s big time,” Kyle said. “I was really impressed with the way she played that night. One of the hardest things for me when I was a freshman was not just knowing the play, but knowing how to play within the play. She was directing people where to go in different sets. She knew exactly where she was supposed to be.

“I want nothing to do with Kari Korver in a shooting contest, I’ll tell you that!” Kyle laughed.

That’s high praise coming from someone who set the NBA record for highest three-point shooting percentage in a single season with 53.6 percent in 2010 with the Jazz.

Kari, born in Paramount, CA, was usually the one in the crowd watching Kyle’s games for the Sixers, Jazz and Bulls, growing up studying the quick release on his shot while perfecting her own.

“I was in third grade when he was getting ready to get drafted,” Kari said. “It was so cool to watch him on TV and to get to go to Lakers and Clippers games. I brought a ball with me to school every day like he did.

“To have someone in your family succeed in basketball like that gives you hope that you can do it too.”

Kari is the first woman in the family to play Division I basketball, as she currently leads No. 14 UCLA (23-6) in three pointers made (34), and is ranked fourth in the Pac-12 in three-point percentage (34.7 percent), earning honorable mention Pac-12 All-Freshman Team. Kyle was the fifth all-time scorer at Creighton, and his three brothers Klayton (Drake), Kaleb (Creighton) and Kirk (Missouri-Kansas City) also played at the Division I level. Kari and Kyle’s many uncles, as well as Kyle’s father, all played Division III basketball. Kyle’s mother Laine once scored 74 points in a high school game before competing for Division III Central College in Pella, IA.

The Korvers don’t just come to each other’s basketball games to cheer. Each person in the family sees something that the average fan doesn’t—he could have set a back screen before he rolled to the basket, or her teammate should have skipped the ball to hit her for the fade three in the corner—such resembles talk at the dinner table.

“Our family really celebrated playing basketball the right way,” Kyle said. “We may not be the most athletic family but we play hard, smart, and we can shoot the ball. We stick to that.”

Separated by more than a decade, the two shot around together for the first time at a family gathering at a local gym when Kari was a freshman at Valley Christian high school.

“Kari walked in a little late and just started popping threes,” Kyle recalled, who was born in Lakewood, CA, before moving to Iowa for his teenage years. “And I was like, Woah—Kari can shoot that thing!”

Though Kari once hit 11 threes in a high school game, she and Kyle have never played one-on-one. A friendly game of H-O-R-S-E usually turns into a three-point shootout, with Kyle often the victor.

Now that the two are adults, Kyle has served as a mentor to Kari. She’s made at least one or more threes in 11 of her last 13 games in 16.6 minutes of tick, including a career-high five threes (17 points total) in a 58-50 win at Arizona State (March 1) that secured the No. 3 seed for UCLA in the Pac-12 Tournament.

“Kyle tells me that your shot is going to be off some days, but to just keep working hard before and after practice,” Kari said. “He really stresses to take care of my body.”

After averaging 25.3 points and 7.8 rebounds a game as a junior in high school, Kari tore her ACL in the summer, causing her to miss her final season. She managed to recover and win the American Family Insurance High School Girls Three-Point Championship at the NCAA Men’s Final Four in New Orleans last March.

Formerly the No. 85-ranked player in the nation, Kari is now making the most of her minutes in decisive games against ranked opponents.

The Bruins defeated then-ranked No. 11 Oklahoma (November 14) on the road, as Kari had 6 points, 1 assist and 1 steal in 10 minutes of play. She scored 13 points (including three threes) in a five-point loss to No. 7 California (January 20).

“I couldn’t be more thrilled to have her,” UCLA head coach Cori Close said. “She plays with incredible passion. The day I left Florida State to accept the UCLA job, my assistants there told me, ‘You have to recruit her, she’s an amazing shooter,’ and the fourth day on the job here I got a call from Kari’s club coach saying that this kid’s dream school is UCLA.

“It was destined to be. She’s an integral piece to this team.”

Though Kari was recruited for her offensive abilities, she doesn’t want to become a one-dimensional player. With a Pac-12 Conference quarterfinal in Seattle approaching on March 8, Kari knows that the scouting report is out; she hears the opposing coach yell “shooter” as she subs into the game.

“Shooting is my best thing, but I want to help the team in other ways too,” Kari said. “Whether it be trying to get a rebound or pass into the post, whatever is needed, that’s what I wanted to do this year.

“I’m just really excited to be playing. It was a long year for me during my senior year not getting to play. It was hard to be patient. Now finally getting to play, and at Pauley Pavilion, is something I’ve been dreaming about for a long time.”

Mirin Fader is a sportswriter based in Los Angeles. Her work has appeared in Dime magazine, Clippers.com and WNBA.com (L.A. Sparks). All of Mirin’s work can be found at her website mirinfader.com.