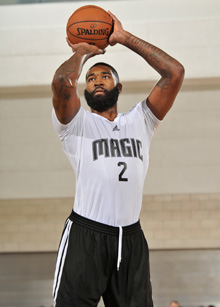 Kyle O’Quinn didn’t want to be that kid. The uncoordinated tall kid who could barely make a layup, who only made the varsity team because he towered over everyone else.

“I definitely didn’t want to be that tall kid on the bench either,” O’Quinn said.

He was in the middle of a growth spurt his junior year at Campus Magnet High School in Queens, NY, having transferred from his neighborhood school. His new classmates assumed he played ball, but the last time he had suited up was for a rec league as a child. “You know, where you get a trophy for just being there,” he said.

Simply being tall wasn’t good enough for him, either. He wanted to be good—college basketball good. He was raw enough to make the team, but too raw to see minutes on the floor as a junior. Yet once the gym and weight room became his second home, he transformed himself into a 20-point, 12-rebound and 3-block a night performer by his senior year.

His high school friends, who practically forced him to tryout for the team, would never have expected that the 6-10, 240-pound big man would be wearing an Orlando Magic jersey right now. Not after picking up the game so late. Not after playing for mid-major Norfolk State, his only scholarship offer. Not after being left out of most NBA mock drafts.

“I can’t even believe it sometimes,” O’Quinn said. “When you’re a kid you want to be Kevin Garnett. You want to be Carmelo. You want to do what those guys do, so to be on the court with guys like that is truly an honor. I’ve had to work for everything I have.”

Playing for a mid-major school meant out-hustling, out-rebounding and out-scoring players from bigger conferences. As a senior in ’11-12, he averaged 15.9 points (on 57.3 percent shooting from the field) and 10.3 boards a night. His 20 double-doubles tied for fifth in the nation. Becoming the first player in MEAC history to win the Conference Player of the Year and Defensive Player of the Year honors in the same season, he led Norfolk State to their first ever MEAC title and NCAA Tournament berth.

Then the buzz around him started to make legitimate noise. No. 15 Norfolk State upset No. 2 Missouri 86-84 in the second round of the 2012 NCAA Tournament, and O’Quinn finished with 26 points and 14 rebounds. Most watching on national television, who had never seen him play before, were stunned. But those who knew O’Quinn best saw it as just another day at the office for him.

“Even before Missouri, in his junior year, he had a stretch of five or so double-double games where he really started to turn a corner and work even harder. Against Coppin State he had 37 points and 19 rebounds. That gave him the confidence to realize that he could become a professional player.”

Pro scouts began to take more notice when he was awarded MVP of the Portsmouth Invitational Tournament for collegiate seniors after posting 8 points, 12 rebounds and 6 blocks in the championship game.

And since being drafted by the Magic in the second round in 2012, 49th overall, O’Quinn is again working to make a name for himself.

The potential is there. The size is there. Now he needs more time to develop.

“Coach [Jacque] Vaughn always tells me, whenever I go in, to give my best. If I go in for three minutes, he’ll tell me, in those three minutes, ‘Show me something.’

“I try to work as hard as I can so that when game time comes, all I want to do is show and show and show. It’s tough being on the bench when I know I can do something. So when I get in the game, I want to do anything I can to make the team better.”

Victor Oladipo may be the main attraction heading into next season, but O’Quinn is giving people an additional reason to watch the Magic. In four NBA Summer League games this summer, O’Quinn averaged 8.5 points, 8.5 rebounds, 2.5 assists and 1.5 blocks per game. He also had two 11-rebound games. He’s currently working on being more consistent with his shot.

Going into just his second year in the League, O’Quinn continues to chip away at the margins in hopes of one day getting to the center.

“I always have a sense of urgency when I play,” O’Quinn said. “I have to keep that. Coming from a small school like Norfolk State, that’s just the mentality we leave with.”

I ask if the tall, lanky kid in him still feels underrated at this point in his career.

“Under the radar?” he pauses. “Enough people might know me by now that I don’t have to feel that way anymore.”