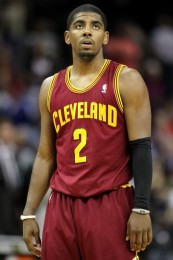 UPDATE: The League confirmed the obvious today, naming Kyrie Irving the top rookie this season. The vote was nearly unanimous: “Irving totalled 592 points and received 117 first-place votes from a panel of 120 sportswriters and broadcasters throughout the United States and Canada. Minnesota’s Ricky Rubio finished second with 170 points and Denver’s Kenneth Faried finished third with 129 points (one first-place vote). Players were awarded five points for each first-place vote, three points for each second-place vote and one point for each third-place vote. […] The top selection in the 2011 NBA Draft, Irving joins Oscar Robertson, Magic Johnson, Allen Iverson and, LeBron James as the only No. 1 overall draft picks to average at least 18.0 points and 5.0 assists. In addition, he is one of only six rookies in league history to average at least 18.0 points, 5.0 assists, and 1.0 steal while shooting at least .450 from the field, joining Johnson, Jordan, Alvan Adams, Grant Hill, and Tyreke Evans.”

He was the first overall pick in last summer’s NBA Draft, and now he’s on the verge of officially being named the League’s top rookie.

After being the overwhelming favorite for much of the lockout-shortened season, Kyrie Irving will reportedly win the award this Tuesday.

From the AP and Plain Dealer:

Kyrie Irving began his first pro season as the top pick and ended it as the top rookie. Cleveland’s smooth, playmaking point guard has been chosen as the NBA”s Rookie of the Year, a person familiar with the voting said. Irving’s selection is hardly a surprise since the 20-year-old led all first-year players in scoring – 18.5 points per game – and renewed hope for Cleveland’s franchise. He’ll receive the award on Tuesday, said the person who spoke on condition of anonymity because the league has not yet announced the winner.

“This season has been a special one for me,” Irving said on April 27, a day after the Cavs finished with a 21-45 record. “We overcame a lot of obstacles during the lockout-shortened season. It’s been a learning experience. I grew as a player from the mental standpoint, getting used to the NBA grind.” […] Irving becomes just the second Cavs’ recipient of the NBA honor. LeBron James, who like Irving was a top overall pick, won the award in 2004.

Cleveland Cavaliers fans will be expecting even bigger things (in terms of numbers and wins) from the 20-year old next season.