Lakers Vs. Suns: First Round Preview 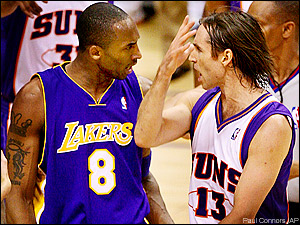 That was the script last year. There hasn’t been a script revision this time around. Last season, the Los Angeles Lakers and the Phoenix Suns played in one of the most memorable first round Playoff series in NBA history. Coming off a controversial second consecutive MVP award, Steve Nash went up against someone who many felt should have been the one with the regular season hardware (Kobe Bryant), and all hell broke loose. Phil Jackson introduced the rest of the Bryantaires to the world, and shockingly enough, it worked. Using stifling team defense, and a balanced offensive attack, the Lakers shocked the basketball world by taking a 3-1 series lead against the heavily favored Suns.

Game 4 was a classic. It had everything one could hope for in a sporting event, and then some: Intrigue, drama, a hero, a goat, and…love (more on this in a minute). Coming into the nationally televised contest, the Lakers held a surprising 2-1 series lead but no one seriously thought they could pull off the upset. Late in the overtime period, Phoenix had a one point lead and it looked like they were well on their way to tying the series. But then, Nash got tied up by Walton and Odom, forcing a jump ball.

I was watching the game in my bedroom with a lady friend who had never sat through an entire basketball game before, but she was just as captivated as I was. Walton won the tip, and Bryant gathered the rock. He drove down the middle of the court, went slightly right with two dribbles after he crossed the three point line, and let a jumper fly over Raja Bell and Boris Diaw. Pandemonium. Staples went absolutely berserk, and I ran circles around my apartment screaming like a lunatic. When I returned to the room, in my elation, I planted a loooong kiss on my lady friend’s lips (much to her surprise). Today, she is my girlfriend.

While game 4 represented nothing but joy and vindication for us Laker fans, game 6 brought us crashing back down to earth. You remember Kobe’s 50, Nash’s brilliance, and of course Tim F*cking Thomas’ three that forced overtime. I went to a bar here in Ottawa to catch the game, and afterwards in a drunken blogging haze, I declared it the worst loss that I had ever experienced as a sports fan. I didn’t even bother watching game 7. Tim Thomas basically ended the series with that shot. Hope you’re enjoying the offseason, Tim. Jerk!

So here we are again. Lakers vs. Suns. First round. Phoenix just came off one of the best seasons in team history, everyone’s healthy, and they’re serious title contenders. The Lakers regressed from last season, they’ve been banged up all year, the offense in once again “Give the ball to Kobe and get the hell out of the way”, and there’s no reason to believe the series will be as entertaining as last year. HOWEVER, there’s a reason we watch and they play the games: You never know.

Logic, reason, intelligence, my two eyes, and 99.9% of the world say the Suns in 5 games or less.

My heart says Lakers in 7.