Lamar Odom: It’s on ME 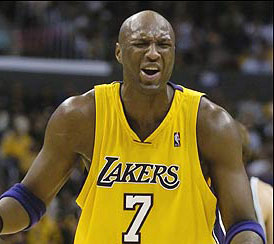 Hello there. Mutoni is on the road somewhere, so here I am. Memorial Weekend (yes, weekend not day) was memorable except I don’t remember much about it. I think I gained like 12 pounds just from hot dog buns. Okay enough of that, let’s talk NBA. So, the Lakers were blown out in game 3 when the Spurs refused to miss a shot, but according to Lamar Odom, well…

“I put this one on myself,” Lamar Odom announces. “I take the blame, totally, for this game.”

“I don’t sleep tonight,” Odom says. “I keep the TV off. I don’t read the newspaper. I get out to practice tomorrow and get my butt to the free-throw line.”
Odom is called for a three-second violation. Odom misses a jump shot.

Odom holds the ball at the end of a 24-second violation. Odom fails to scramble for a rebound that is turned into a fastbreak Spurs layup.

So there you go, case closed. Don’t be fooled by all of the Ginobili jumpers, or the Tim Duncan 20-20, or the Brent Barry show. The Lakers lost because Lamar Odom had a bad game, and he’s being accountable, blaming himself, promising to work harder. We’ll see tonight if Lamar Odom can turn it around and take down the defending champs.