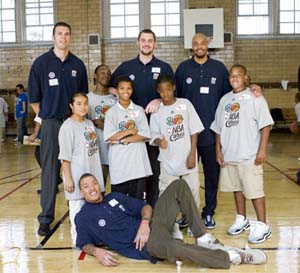 Junior High School #22 in The Bronx was in foul trouble. The school had six principals in two years, a rapidly shrinking attendance rate and even some trouble with gangs. In fact, J.H.S. 22 was listed as one of New York City’s 12 most dangerous schools. The school, like many in The Bronx and other parts of the city, faced the serious possibility of being shut down.

The newest principal, Shimon Waronker, took over the school and quickly revived the fading institution. Attendance went up 93 percent, the school instituted a uniform dress code and has introduced one of only three French dual-language programs in the city. Along with a stricter hallway monitoring system, Waronker also brought the NBA Cares program in to help give new life to the troubled Bronx junior high.

In the past, NBA Cares has painted the hallways and cafeteria of J.H.S. 22. The league also donated their help at a day of service for league staffers at the school last year. This September, just as J.H.S. 22’s returned for the fall, the League once again made a visit to the school as a part of their Rookie Transition Program.

Created in 1986, the Rookie Transition Program is the longest-running and arguably most extensive support system in professional sports. The “RTP” was developed by the NBA and its Players Association to provide youngsters with the skills and information necessary for a successful move to the NBA. Every player that is drafted, plays or expects to play in the NBA must complete the program within three years of entering the league.

As part of the RTP, 60 members of the league’s 2008 rookie class visited J.H.S. 22 for a morning of leadership and team building activities. The players interacted with students in exercises designed to emphasize the importance of teamwork both on and off of the court

After the fun and games, SLAM spoke with incoming rookies Derek Rose, Kevin Love, Brook Lopez and second year shooter Marco Belinelli as they kicked it in the schoolyard during recess.

SLAM: Of all the stuff you heard up there what was the thing that stuck with you the most?

Derrick Rose: I got a lot from all of them, the gambling part, working hard, it’s not going to be easy, they threw so much stuff out there and there are going to be so many people that come up to you in the next couple weeks or as long as you are in the league it’s going to be a tough job but it comes with the territory.

SLAM: How do you feel it has been going for you so far in terms of transitioning from college to the league?

DR: I think I’m doing really well. I’ve been working out, I’m getting over the injury to my knee, that’s going to be over with in a little while hopefully. Just getting to know my teammates, I think it’s going really well. I know it takes time and it takes hard work. I have a lot of patience and I think I work hard so it should be fun to see us play this year.

I think that I was a bit more vocal at Memphis because everyone knew each other so well because we were around each other all the time. Here everyone has their own family and stuff like.

SLAM: Are you feeling 100 percent when you run the floor right now?

DR: Not yet. Time will tell. I’m not worried about it. I’m mobile and everything else.

SLAM: What do you think about the off-season moves the bulls made?

DR: I think they will be good and the run system really well and it looks good for next year.

DR: Not yet but that’s hopefully going to happen soon

SLAM: Brook, what did you do here today?

Brook Lopez: Pretty much just came out and had a good time with the kids. I always enjoy special events like these. We had an event where they have to cross this river type thing in a certain number of steps, you can always step on these plates or whatever. One where you have to get over this imaginary electric fence, stuff like that. It’s just a good time. I enjoyed it.

SLAM: Did you do things like these before college, doing camps and such?

BL: I did a little bit, there were some camps by Stanford I went to, like I said I enjoy these social events. I like hanging out with the kids and getting to know them a little bit.

SLAM: Tell me about the rookie transition and what that’s been like.

BL: It’s a nice place and we are in there for 4-5 days straight We were together all day, from like 8 in the morning till about 9 at night. Its arduous but its really good for you and you make it as enjoyable as possible, make most of the presenters memorable because you know you retain the important thoughts you need to and just adds good lessons about them, ways to handle your money so you don’t blow it in financial situations and dealing with gambling and drug use, it’s all really good.

SLAM: Did you get to play ball at all?

BL: Not really. I haven’t actually shot around in a while, since you got here. It’s been strictly classroom stuff and I don’t mind that. It’s just hanging out with the guys, you know pretty much everyone. I mean basketball is such a little community, its own world, so while they are there you just enjoy their company.

SLAM: Even though you aren’t coming in for a whole lot of money are you going to miss being in school?

BL: Definitely. I love the people at Stanford, everyone is unique and they are all kind of weird in a way and makes for a great student body.

SLAM: What was thing that stuck out the most or really hit home in terms of the transition process.

BL: Obviously I am a west coast guy, I’ve lived in California all my life and to come out here to New York and New Jersey is complete different. There are little nuances that remind you that you aren’t back home. In terms of the game, it’s really the speed of the game and the fact that I am playing against grown men now.

SLAM: Tell me, what’s the transition process been like for you.

Kevin Love: So far its been nuts. After the draft it’s been pretty good since that was the most hectic experience of my life. So you got into summer league, got to meet my coaches, my new teammates, found a place in Minnesota, done all the little stuff so far but I’m just hoping the transition brings a little bit of ease just because we have a pretty young team in Minnesota and hopefully they will help me out along the way.

KL: We did the NBA cares thing, the same one we did at the draft with the Special Olympics. We played a little basketball with them and then we worked on teamwork. We had 3 different games to display teamwork and leadership for the little kids.

SLAM: Of all the stuff you heard during the program, what do you feel will help you the most?

KL: Definitely the financial stuff, how many nightmares that have happened with a bunch of players. You try to look at that and you really don’t want that to happen so you have to be on top of your taxes and finances as much as possible. Also we have learned a lot, I thought coming in that it would be boring and wouldn’t be worth it but I’ve learned a lot that will hopefully help me transition.

SLAM: Who did you become tightest with?

KL: In our class most of the guys are tight. Mike Beasley, Deandre George, OJ Mayo, all those guys. In my group we got all the foreigners so we have Gasol, a bunch of guys that have played in Spain, Argentina, a few young guys from France, I try to talk to them so it’s cool. Basketball makes it a small world because it makes it extend across the globe and its pretty crazy.

SLAM: What did you like about the event today?

Marco Belinelli: I think it’s great fun and I got to be with all these kids.

SLAM: Did you learn a lot when you were preparing for your trip?

MB: Of course because we learned a lot about everything that’s has to do with being in the NBA.

SLAM: What was the biggest difference for you in terms of playing in Italy to playing over here?

MB: I think it is the best here. There are the best players in the world here, you have to be very strong.

SLAM: What did you work on the most this off-season?

MB: I think it was my shooting and making my defense better. I want to be able to score from any position.

SLAM: Where do you feel like you fit in this year?

MB: I think we have a good time. We have some really good people like Corey Maggette and I hope we can go to the playoffs.

SLAM: Do you enjoy working with the kids?