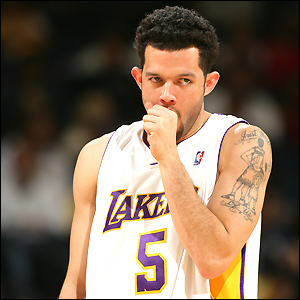 A few thoughts from pieces of games I caught last night:

–Craig Smith, Ryan Gomes and Al Jefferson are beastly. When they lift, the weights should say “underappreciated” on them. Jefferson ate Zach Randolph for breakfast—quite a role reversal, I know—in the first quarter. Getting ahead of myself here, but if the Wolves can land a Derrick Rose or OJ Mayo in next year’s draft, the young beasts in the Target Center will be on point. Literally.

–Really, I just wish Bassy could a freaking jumpshot. I’m pulling for him and I feel bad for him because it would make his life so much easier and his future a lot less European.

–I love the new +/- stat. Zach Randolph’s -3 and Eddie Curry’s +1 compared to Renaldo Balkman’s +19 and David Lee’s +12 tell quite a story. For those you looking for an equation, it looks something like this:

And it’s not that Curry and Randolph can’t help the Knicks win—they can, and they will (occasionally). But against a young, fast front line and a group of shitty defensive guards, the Knicks needed to utilize guys like D-Lee and Renaldo and let the penetration and shots flow through Jamal Crawford and Stephon Marbury. They did. And it showed.

The proof is in the mathematical pudding. Snakpaks, son!

–Leandro Barbosa is ridiculous. Anyone catch the awkward 8 foot floater that he banked in? There was a sequence early in the fourth quarter went he just be-circus on the Cavs. Berserk + circus = Be-circus.

–Also, who was LeBron screaming at in the timeout early in the fourth quarter? Gotta feel bad for whoever that was. Getting your ass verbally handed to you by a 22 year-old surely must suck, no matter how good said 22 year-old is at basketball.

–Watching Derek Fisher school Deron Williams on consecutive possessions was awesome. I think Williams also caught a tech but I was laughing at something my roommate told me.

–I’ve never enjoyed watching the Lakers so much as I did in the fourth quarter last night. Jordan Farmar was delightful to take in–logic and reasoning with the perfect bit of flair; Andrew Bynum played an AWESOME fourth quarter: rebounding, passing, finishing, active hands, youthful exuberance; Ronny Turiaf was the puppet-master of the little things; Luke Walton kept the triangle flowing; and here’s the rub: Kobe…whatever (ok, the block on Kirilenko was incredible, but you get my point). We talk too much about #24, anyway. What’s truly stunning is that I never thought I’d find the other Lakers so enthralling without needing to focus mostly on Mamba. I guess fresh oxygen is good every once in a while.