LeBron and Stephon Hate on Each Other’s Shoes 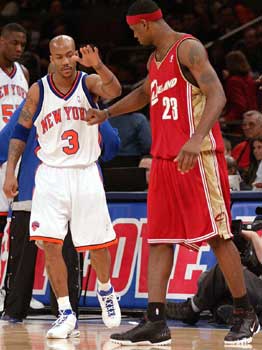 I’ve been posting about LeBron James a lot of late. I swear that I’m not doing it on purpose; the guy just can’t seem to keep his name out of the news. He appeared on some sure-to-be crap mixtape with Young Buck, the League told him to keep his kid off the Cavs bench, he bought a gi-normous house, he’s going to be hosting the ESPYs, his first lawnmower ad dropped, and it just don’t stop.

Last night, he basically called Stephon Marbury’s shoes “low-standard” before the Cavs went up against the Knicks at the Gah’den.

Before the game, James took a little shot at Marbury’s $14.98 kicks, saying he couldn’t imagine endorsing a sneaker that cheap. “No, I don’t think so,” James said.

“Me being with Nike, we hold our standards high.”

When Stephon was told about LBJ’s crack, you knew he wasn’t going to just lay down and take it:

“I’d rather own than be owned.”

Though I think Steph got the upper hand in this mini verbal war, LeBron is still the winner at the end of the day. I mean, King has something like a $90 million deal with the Swoosh, which I’m certain Stephon’s shoe deal comes nowhere near. Still, it was a pretty good comeback.

And remember, LeBron, Steph has Big Ben on his shoe squad now, so watch what you say.