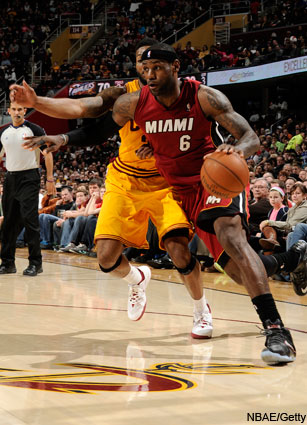 The Cavs made things interesting down the stretch, but LeBron James was simply too much to handle back at Quicken Loans Arena. He put up 43 points on just 19 shots—including 25 points in the first quarter—carrying the Heat to victory.

Without Dwayne Wade in the lineup, Miami got some additional scoring from Chris Bosh (21 points). Cleveland fought admirably sans Kyrie Irving and Luol Deng, as Jarrett Jack (22 points) and Dion Waiters (17 points, 11 assists) were impressive in the backcourt. When their comeback bid came up short in the final minutes, Cavs owner Dan Gilbert unsuccessfully tried to weigh in on Twitter:

That is beyond incredible. What a complete and total joke and tra

Miami is three games behind Indiana for the top seed in the Eastern Conference standings.

On March 8, the Hawks dropped their sixth straight game and had opened the door for the Knicks to make a late run at the eight seed. What a difference 10 days makes. Following an overtime victory against Toronto, Atlanta has won five in a row and now sits 4.5 games ahead of New York.

Jeff Teague had arguably his best game of the season with 34 points and 4 steals, while Paul Millsap finished with a triple-double (19-13-10). DeMar DeRozan led the Raptors with 29 points and 10 rebounds, and all five Toronto starters finished in double-figures. Still, the Raptors went cold in the extra period and the Hawks made their free throws to clinch the game.

The Blazers needed a layup from Damian Lillard at the end of regulation to tie things up against the Bucks. Yes, the Bucks.

Though Portland certainly wasn’t expecting a close game against the team with the worst record in the League, that’s exactly what happened. The Blazers continue to struggle without LaMarcus Aldridge, but Lillard (20 points), Nicholas Batum (21 points, 9 rebounds, 9 assists) and Wesley Matthews (game-high 26 points) helped put Portland over the top.

Brandon Knight had a solid game with 24 points and 8 rebounds, and Ramon Sessions was hot off the bench with 23-5-5. He did, however, fail to make a shot as time expired after Lillard’s late layup in the fourth quarter.

The Wizards appeared to have this one sealed up until John Wall missed two late free throws and Bradley Beal clanked a jumper with a chance to win as time expired. Marcin Gortat had 19 points and 14 rebounds and Drew Gooden was huge off the bench with 18 of his own, but Washington ultimately failed to make up some ground on the Raptors in the East.

Rudy Gay took over the game down the stretch, tying things at 100 in the fourth quarter. He followed that up with 6 more points in overtime. DeMarcus Cousins was big with 24 and 14 boards, and Isaiah Thomas had a triple-double—24 points, 11 rebounds and 10 assists.

The Warriors were without Andre Iguodala and Andrew Bogut, but their starting backcourt easily made up for their absence by pouring in a combined 43 points (23 for Stephen Curry and 20 for Klay Thompson).

David Lee added 20 points and 10 rebounds in a game that Golden State seized control of in the third quarter. Nikola Vucevic was Orlando’s leading scorer with 15 points, but the Magic couldn’t generate enough offense to keep up with the hot-shooting Warriors. Orlando has dropped six straight games, while the Warriors remain 1.5 games back of the Blazers in the Western Conference.