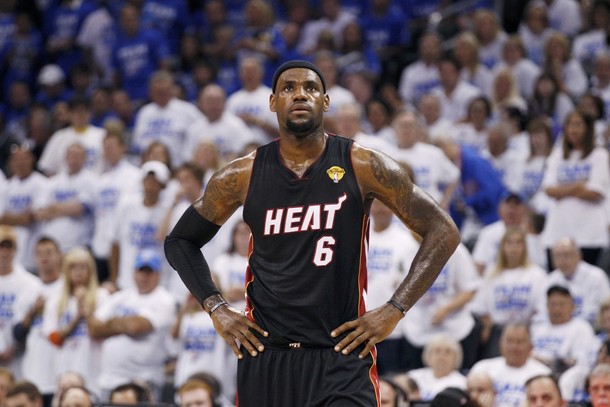 We have one hell of a championship round on our hands, as the NBA Finals now shift to Miami for three consecutive tilts, following the Heat’s big Game 2 win last night.

LeBron James (32 points, 8 boards, 5 assists) received the help he so desperately needed from Dwyane Wade and others, and in the end, James got the best of Kevin Durant at crunch time.

“We wanted to split,” James said. “Game 2, we wanted to come out and get a win. We didn’t want to go back home down two.” While his offense shaped the game early, his defense saved it in the end. He provided desperate defense against Kevin Durant in the closing seconds, forcing the young offensive maven to miss from seven feet with a chance to tie the game. James was 10 of 22 from the field and 12 of 12 from the free-throw line. “I just wanted to put a body on him,” James said.

“We had a chance, man. It’s tough,” said Durant, who had 16 points in the fourth quarter. “It’s tough to lose that way. I was open and I missed the shot.” […] Dwyane Wade, critiqued for looking a little past his prime in Game 1, responded with 24 points, including 13 in the first half. Wade was 10 of 20 from the field to go along with six rebounds and five assists. He was 4 of 6 from the free-throw line. “Just know that I’m always going to keep coming back until I can’t play this game no more,” Wade said. “I had more opportunities than Game 1 and I was able to attack it.”

This was the OKC Thunder’s first Playoff loss at home this year, and now they must prove their mettle on the road. Even more importantly, the Thunder will need to get off to a better start in Game 3.

The first two games between Miami and OKC have provided thrilling finishes. Here’s to hoping this theme continues as we move forward in these NBA Finals.