LeBron James to Play the Role of Point Forward 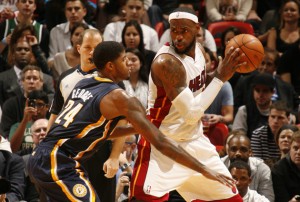 The NBA’s worst-kept secret is that, from now on, LeBron James wants to play closer and closer to the basket. In fact, James plans to make the paint his permanent residence.

On media day, LeBron let the press corps in on how the Miami Heat will use his wide range of skills this season. Head coach Erik Spoelstra wants the reigning MVP to morph into some kind of Magic Johnson/Scottie Pippen hybrid.

After witnessing the success James had at playing as the point guard on offense and power forward on defense at key moments in their playoff run, the Heat essentially have doubled down on the idea. The result could have James playing a point guard/power forward hybrid position this season, something the NBA has not really seen before on a regular basis. […] “I think it’s pretty cool,” James said. “I’ve always looked at Scottie Pippen and of course Magic [Johnson]. Magic was a 6-9 point guard who could also play different positions. Pip played point forward in the triangle offense. Grant Hill, when he was in his prime in Detroit, was also kind of that point forward guy.”

There have indeed been numerous point forwards — i.e., small forwards who ran the offense — with Pippen often recognized as the player who defined the role. James has played a version of the position for most of his career. He’s led his team in assists all nine season he’s been in the league. But as far as being a full-time point power forward? That’s a new one. […] “[Spolestra] has so many different lineup changes and different mindsets of how we should play and why it will be successful,” James said. “If it is for the good of our team I don’t have a problem with that at all. It’s a matchup problem for a lot of teams with me at the power forward.”

Due to LeBron James’ limitless ability, the Miami Heat’s coaching staff can continue to experiment with their ideas of “position-less” basketball. They will rely on defense, speed, and outside shooting.

But above all, the Heat will count on LeBron James to dominate the post.