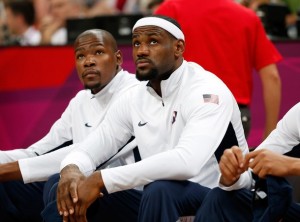 Kevin Durant is unquestionably the NBA’s best scorer. That has been the case for 3 of his 5 seasons in the League. Ergo, that makes him the best scorer in the galaxy, which includes the Olympics.

There’s just one little problem: Kevin Durant, surrounded by an enormous amount of talent and firepower on Team USA, has become a tad gunshy. And LeBron James wants Durant to get back to his old ways.

James (among others) is strongly urging his Olympic teammate to shoot, and shoot often.

Kevin Durant, the scoring champ in question, has not played in an Olympics before. Like any newcomer, he wants to be liked. So time and again during the U.S. team’s brief time together this year, Durant has passed up the sort of open shots that he drills with the Oklahoma City Thunder. “I told KD (Durant) to just be himself,” LeBron James said Sunday after Durant led the U.S. with 22 points and added nine rebounds in a game that was only close for one quarter. “On a team like this you can kind of shy away because there are so many great players here. But KD’s on this team for a reason. He’s one of the best players the world has and he’s a three-time scoring champ. So we don’t want the KD that defers. We want the KD that he is in Oklahoma City.”

James’ cry for Durant to put the ball up more often has been echoed around the team. When Kobe Bryant was asked what he said to Durant during the game, Bryant replied gruffly: “Shoot the … ball.” Said Durant: “Sometimes coach was screaming at me. And Chris Paul was screaming at me more than anybody, ‘Shoot the ball!’ I guess I’ve got to be aggressive.”

Russell Westbrook could not be reached for comment, I’m assuming. Kidding!

Until the Americans are met with a real challenge – say, a particularly determined squad from Argentina or Spain — KD can defer to his teammates all he wants. One suspects that Durant won’t shy away from putting away an opponent by shooting the ball when it really matters.