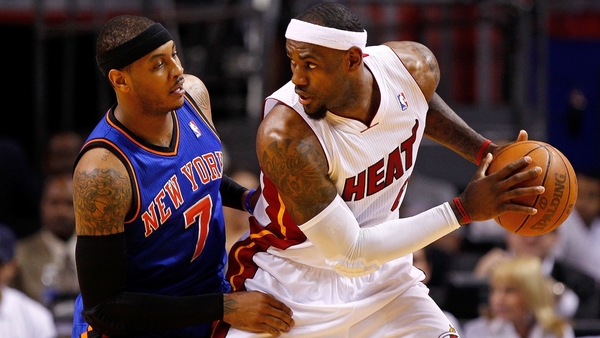 LeBron James and Carmelo Anthony have been close friends since their high school days, so it’s no surprise that LeBron is bummed out about what’s happening with Melo’s team this season.

Despite Anthony’s individual brilliance, the New York Knicks have been an absolute trainwreck, and James admits he’s worried about the toll the losing is taking on his buddy’s psyche.

“I don’t worry about their franchise. I worry about Carmelo Anthony,” LeBron James said Wednesday. “I always want him to win and succeed. Obviously, he’s been playing great basketball. I don’t like seeing him lose like they’ve been losing, but I don’t really care about the franchise.”

Dwyane Wade said the fact that Anthony is having a great season statistically in a contract year makes it even tougher to experience what he’s going through on a losing team.

“I’m sure it’s very tough,” Wade said. “After every game he gets asked that question about free agency. I don’t know the mind-set of a guy like that. I know he loves New York. I know he loves playing in that city and for that city. And he proves it every night he goes out there. I think that’s all that matters.”

The 21-36 Knicks are riding a three-game losing streak into Miami for a Thursday night tilt with the defending champion Heat, in a matchup that most would have considered a battle of Eastern Conference heavyweights at the beginning of the season. Instead, most of the focus will be on Melo’s future.

LeBron James finds it easier to deal with the free agent questions this year than he did back in 2010 – he refuses to engage the media in the endless game of speculation about what he’ll do this summer, and there’s little reason to believe he’ll leave South Beach anytime soon.

The same can’t be said for Carmelo Anthony in New York.