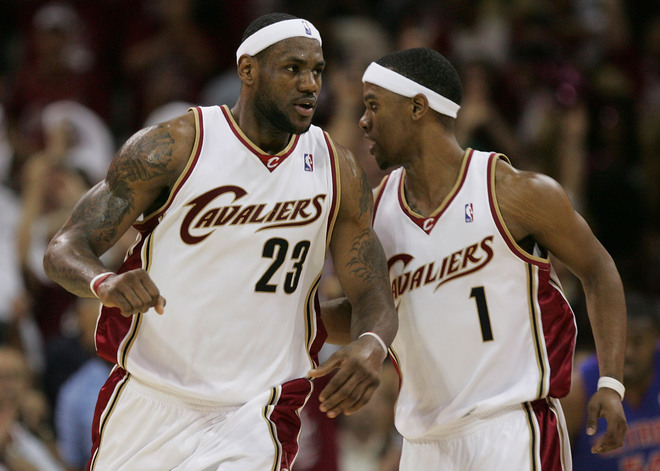 We have Game Notes from last night posted already courtesy of B.J. Reyes. Boobie! Boobie! But also LEBRON. There is no way to prove this of course unless he admits it, but I believe that he needed to go through what happened in games 1 and 2, and he had to take the beating from fans and media. He thrives on responding to challenges. This NBA season, there were none. He was content to just cruise all the way to the #2 seed in a weak conference. He never had to be the real LeBron this season. With his team down 2-0, LeBron has done everything you could ever hope for as a response to the haters/doubters. Now it’s a tie series and it almost feels like its his due rite of passage to overcome the superior team and carry Cleveland to the Finals.

The poor play of Chauncey Billups in this series has been shocking to say the least. Is it possible that his clutchocity has been drained and seeped up by LeBron? Did LeBron make an incision in Chauncey’s head and remove his brains to extract his powers? (Yes I took it there!) It sure looks like it.

As I said, B.J. Reyes wrote his Game Notes and I put them up nice and early. SEGUE! Speaking of people named Reyes, the Mets game went to extra innings last night, and Jose Reyes manufactured the tying run with a walk, drawing a balk, advancing to third on a groundout, and then scored it with two outs on another balk. That I have never seen before. If they ever test Jose Reyes for amphetamines… yeah that would be a problem. Either that or the guy eats way too much sugar. Such is the life of the most electrifying and exciting player in baseball. I haven’t talked much about the Mets this year, because really what’s there to say? They play in the NL, and not to be too cocky or overconfident, but no other team in that league even deserves to be on the same field with the Metropolitans. The National League is officially ON SMASH. Even with all of the injuries and old guys and Delgado’s latest death slump. Lang is keeping a close eye on those Wild Card standings for the Braves, like it matters.

Oh, one mistake. Delgado is not in a death slump anymore. He hit the walk off game ender against our old buddy Armando and was in full celebration before he even left the batter’s box. Come on National League, give them a challenge. Keep them sharp this year.

The amusing NBA story from yesterday is the Jerry Buss DUI. He is 74 years old with a 23 year old female friend in the car. Wonderful. The life of an old kajillionaire is better than most senior citizens. Also, there is the latest ongoing Kobe saga. Sigh… What came first, the L.A. or the drama? Couldn’t he at least have waited until the week off between the conference finals and The Finals?

Finally, on a personal note… today is the day of my mom’s retirement party. After working hard for more than 45 years, and dealing with the three headed freakshow that is my father, my brother, and myself, she gets to relax. Congratulations Mom!