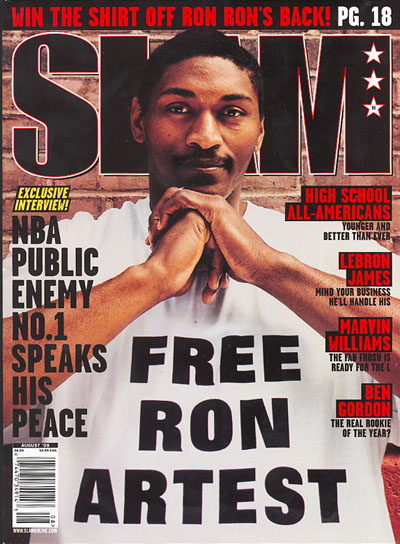 QUOTES OF THE DAY

“Man, they ain’t going well. Leave me alone.” — Kenyon Martin, asked about his meetings with George Karl.
“I was working for Dallas and when [DeSagana Diop] first came to this country, I picked him up from the airport and I was one of the first guys to work him out. He was just out of high school and he weighed 190 pounds. A year and a half later, he was pushing 300 pounds. That’s what happens when these guys get over here and start eating our food.” — Tony Ronzone, Pistons director of basketball operations.

“I’ve got one thing to say to that: We make love to pressure.” — Stephon Marbury, asked about the pressure on Isiah to have a winning season.
“I told him if he leaves, then I’m going to kill him. Unless he wants to die, he’s got to stay.” — Ron Artest, on Bonzi Wells.

• Ron Artest, genius.
• That could have been interesting. The Spurs apparently went hard after Alonzo Mourning, but weren’t able to convince him to leave Miami. Next up for the Spurs? Melvin Ely?

• The Nets are sending out college kids all summer to accost people waiting for trains to Manhattan and try to talk them into buying season tickets. They’re calling these kids the “Bring It Crew.” How about the “Leave Me Alone, Please” group?

• Across the river, Stephon Marbury can’t stop smiling. Or being weird.

• David Aldridge says the Pistons will be better than ever next season. In Detroit, Pistons owner Bill Davidson is taking a lot of the blame.

• In the sixth paragraph here, the Detroit Free Press does the old “compare a white guy to a white guy” thing.

• Amare Stoudemire has hired a film crew to follow him around all season and document his comeback.
• Blah blah blah blah blah Steve Belkin hates Atlanta Hawks fans. I like the person on Hawksquawk who said the Hawks ownership should give Billy Knight a five-year extension to see how Belkin reacts to that. Shoot, give him ten years!

• Great feature from White Hall, Alabama, Ben Wallace‘s hometown, about his rise from nothing to something.