Let’s Not Dance on Kobe’s Grave Just Yet 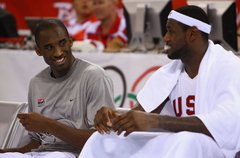 My man Alex Boeder penned a terrific piece for us today. It was well-written, concise, and made its overarching point intelligently.

It was also, irrevocably wrong.

For the past week or so, LeBron James and his Team USA mates have beat up on a bunch of helpless foreigners whose names you can barely pronounce. They’re dunking, rebounding, and defending all the way to an all-but-assured Gold medal, and a return to glory for USA Basketball. James has been tremendous during the tournament; Kobe Bryant has not.

Though he played well in the most meaningful contest thus far (the Revenge Game against the Greeks), Bryant has otherwise struggled. Kobe has at times forced things offensively, he’s occasionally been over-eager on the defensive end, and has generally failed to adapt himself to FIBA play. LBJ and a reborn Dwyane Wade have been this team’s stars. Bryant has quite simply not risen to the occasion.

This does not make LeBron James the best basketball player in the world.

The Olympics are not a reflection of hoops being played at the highest level. They’re a welcome distraction every four years, a chance for the tv networks to make a killing in advertising dollars, for countries to push their political and ideological agendas through the smokescreen of athletic competition, and the basketball is, at best, passably watchable.

Yes, Team USA is no longer the immovable force it once was, but if they take this thing seriously (and they certainly have of late), then they should have no problem waltzing to the gold medal each and every time.

European teams play together for years, developing beautiful teamwork and camaraderie along the way, and most of their players have the added advantage of playing with FIBA rules year-round. And yet, it remains truly shocking whenever a hastily-assembled group of American ballplayers (thrown into a completely foreign playing environment) loses against these guys.

In other words, shining on the international stage – though admirable – doesn’t really prove a whole lot for NBA players.

And I hate to do this, because the comparison has been beaten into the ground so much, but it bears noting: On the famed ’92 Dream Team, though his image was plastered everywhere and he was treated like a rock star (sound familiar?), the best player was not MJ. It was Charles Barkley.

(My memory’s not too good, but I don’t recall anyone claiming the Round Mound to be the world’s best at anything but gambling after Barcelona.)

The Cleveland Cavaliers won three games against the eventual champs in last season’s NBA Playoffs (as did Joe Johnson’s Hawks). The Hawks, Cavs, and Pistons all pushed a Celtics team that, after playing dominant ball all season long, didn’t really hit its Playoff stride until Game Four of the NBA Finals.

This does not make LeBron James the best basketball player in the world. If anything, it means that Doc Rivers somehow managed not to screw it all up.

In a League chock-full of stunning physical specimens, it is LeBron James whom the Gods smiled upon and blessed with their most prodigious gifts. An absurd blend of power, speed, grace, and preternatural instinct. He has all of the tools to become the greatest player to ever dribble a Spalding.

He will eventually break most of the scoring records (and you can pretty much check off any single one that starts with “youngest player to … “); he should win a bunch of championships by the time it’s all said and done; and if he doesn’t rack up at least a couple of MVP’s by the time he’s 30, a full-scale investigation should be launched.

The reality is that though he’s clearly the game’s future, so far, LBJ has appeared in the Finals only once, where his team was swept; he has played his entire career in the weaker conference; and his defense continues to leave a lot to be desired. All things that can be fixed.

Sometime in the not-too-distant future, LeBron James will be the best basketball player in the world.

After playing brilliantly in three Playoff rounds (not to mention, the entire regular season), Bryant almost inexplicably crapped the bed in the Finals, and the Lakers only managed to eke out two victories against Boston before getting blown off the floor in Game Six. It was a humiliating performance individually and team-wise, one that understandably raised questions about his place among the game’s greats.

Kobe Bryant is turning 30 years old this month. He has appeared in the NBA Finals five times (winning three titles), he is considered to be one of the greatest natural scorers of all time, he has been named to the League’s all-defensive team eight times, he has an MVP to his name (though it’s agreed by just about everyone that this is one of the great injustices in all of sport), and health permitting (I don’t need to mention his name, do I?) Bryant and the Lakers remain the favorites to win it all next season.

In what was arguably the most intensely competitive conference in League history last season, a young and largely inexperienced Laker team emerged as top dog. Their leader was rightfully (and finally) crowned MVP. He is in the middle of his prime; impossibly, he has even more to prove now than ever before.

Kobe Bryant remains the game’s greatest offensive force, one of its better defenders, and is still the most feared competitor working today.

That makes him the best basketball player in the world.