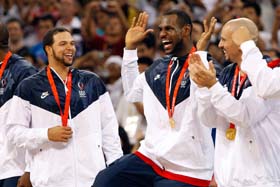 Line Of The Night:

After starring in the pre-Olympic warm-up games, D-Wade had not had the same impact in the official competition. But with gold at this fingertips, he was locked in from the moment he subbed in, clearly proving Miami could throw him in the 6th man role next year if they are in need of some extra hardware. His D resulted in a bunch of breakaways throughout the game, and he had the outside shot working, making him unguardable. Then in the fourth, lost in the Doug Collins/Kobe Bryant love fest, Wade put perhaps the final nail in the coffin, hitting a three to give Team USA a 111-104 lead with 2:08 remaining. Bob Marley.

Worst Of The Night:

Hey Rudy… NEVER FOUL THE 3-POINT SHOOTER (4th quarter, 3:10)! Especially if it leads to such an annoying celebration from the Kobster. Any more replays of him putting his finger to his lips or of Coach K in general, and the L.O.N. offices would have been re-painted Spanish red and yellow with “La Marcha Real” playing in the background.

Eat Your Breakfast Of The Night:

After spotting noted breakfast chef Rudy Fernandez on the perimeter, mid-way through the fourth quarter, The Kobster decided it was time to reward all of teammate Dwight Howard’s hard work with a complimentary breakfast, so he gambled and missed on a steal attempt. Rudy took it baseline and BOOOOOOOOOOOOSH! EAT YOUR BREAKFAST DWIGHT!!!!!!! MAGDALENA AND CHURRO SPECIALS ALL DAY!

The Spanish J.R. Smith Of The Night:

Rudy Fernandez – 22 points, 2 assists, 2 boards, 1 steal, 1 breakfast served, 1 fade away three-pointer over on of the best individual defenders in the world (Prince).

The gold medal game was Rudy’s coming out party for real… except for the fact it happened in the middle of the night and maybe no one saw it. He did

all of his damage in only 17 minutes, creating highlight after highlight while keeping his team in the game. And honestly, have you ever seen him, Rex Chapman and J.R. Smith in the same room at the same time? Didn’t think so.

What Could Have Been Of The Night:

Carlos Delfino (and his eyeliner) dropped 20 on Lithuania to bring home a disappointing bronze medal for the Manu-less Argentinians. After seeing the difficulty Spain gave Team USA, Manu’s ankle injury just minutes into the semi-final game is only underscored further as a pivotal moment. What if he plays that whole game? What if Jose Calderon is available for the final? What if Pac decided to skip that weekend in Vegas? We will never know.

Formal Apology Of The Night:

After witnessing Mr. Navarro step up and ball out in Jose Calderon’s absence, L.O.N. would like to formally apologize to Mr. Navarro, his family, and his friends. He never quite made it fully onto our radar this past NBA season, and as a result, we never launched an official “Free Juan Carlos Navarro” campaign, and now we’ve lost his talent to the either of Euroleague. While it is definitely too little too late… FREE JUAN CARLOS NAVARRO!!!! Now that he is battling Andre Barrett for playing time, maybe the campaign IS still necessary.

Olympics Hangover Of The Night:

During any other off-season, LeBron James would be celebrating the acquisition of point guard Mo Williams by the Cleveland Cavs management right about now. After all, going from Delonte West, Boobie Gibson, Eric Snow and Damon Jones to Mo is a nice little upgrade, right?. However, LeBron has been sharing the court with a bit of a different point guard crowd lately, and it will be an adjustment. Sorry, Mo.

Double R Of The Night:

It has been a while since the Ruff Ryders had the streets on lock, but Ricky might be able to provide the Dean fam once last shot at glory. Think of the marketing opportunities! The And-1 Double R Edition, featuring Rubio highlights over Ruff Ryder tracks? Europe would be a wrap. They already have the start of a legit mix from the gold medal game alone, with the sick fast break no look to Pau and the Jason Kidd double-serve up – once on the perimeter and once on a break in which Ricky took on Kidd and LeBron. And if we have to stomach the Euro killing the dollar, then they should have to dealwith Drag-On and Eve.

Seriously though, while his deficiencies (fatigue, a milli deflected passes) showed as the game went on, let the L.O.N. co-signed Rubio for #1 campaign begin.

It was great to watch basketball without all of the constant commercials/timeout breaks/tv network crap the NBA forces on us. Too bad we still had to deal with Mike Breen’s opinions… The Etching Strikes Back: LeBron James’ “Gold Medal” shoe features Nike’s version of the plague… Spain’s turnovers must have been killing Jose Calderon on the bench. He was in uniform, too, so you know he wanted to sneak out there… At one point Tayshaun Prince faked a pass then hit a lay-up, showing more flash in that single play then he has in his entire NBA career. And of course, Olympics replay highlights are pretty much non-existent, so it basically never happened!… David Stern had a long day/night/something before this game. He was in the crowd looking rough… And who was next to him in the purple shades? Some sort of futuristic, secret service, alien? Wild… Navarro: Spanish for “floater”… Carlos: Spanish for “runner”… Juan: Spanish for “tear-drop”… Really, Jason?… Melo getting his Mateen Cleaves on was comedy. You could probably catch him sleeping on the bench in Denver…