Links: A Dozen Points Of Light 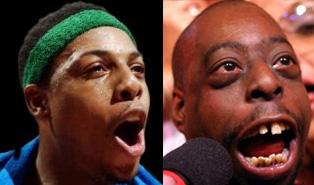 1. Let’s start with a laugh. When I came in yesterday morning, Konate was watching this video and laughing his butt off. Since seeing it, I’ve been laughing, too.

2. Since my grandfather passed I’ve kinda been in a funk, and last night was the first time I’ve just sat and watched hoops in a week or so. I’ve tried to keep my nose in the game, but I’m ready to stick my whole brain back in, starting now.

3. That said, I really enjoyed watching both games last night, although to me that Jazz/Lakers game didn’t seem as entertaining as Cavs/Celts because the refs seemed so vigilant about protecting Kobe. Also, there was a level of ineptitude in that Cavs/Celts game that made it fun to watch. How many times can Ben Wallace fumble a ball? Could LeBron crack Boston’s second half double-teams? I don’t know what shoe company Wally Sexyback endorses, but that company should politely ask him to switch to a competing brand, because he looks like he can barely run out there, and he can’t jump at all. LeBron playing with The LeBrons would have a better chance at winning this series than this Cavs team does.

4. Is it just me, or are the Celtics a hard team to root for? I’m a completely unbiased observer of this series — I could really care less which team wins — but I find myself rooting for Cleveland just because Boston does so much woofing and taunting with even the slimmest of leads. And then there’s the Celtics’ bench, where the players stand for the entire game. That’s cute for a high school team, but this is the NBA, fellas. We know you guys want your team to win. Great. Greg Kite and Jerry Sichting weren’t standing on the sideline in the ’80s, and neither were Robert Horry and Brent Barry last season. Have a seat, please. Or maybe they’re waiting until they win a road game?

5. During the Celts/Cavs game last night, I also came up with a bunch of a-alikes. I don’t have time to do the pictures of each one, but here: Referee Tony Brothers and Eddie Munster; Paul Pierce and Beetlejuice from the Howard Stern show; Elijah Wood and Sasha Pavlovic; Leon Powe and either Jason Richardson or Michael Irvin (or both). And then there’s the usual suspects: Big Baby and Fat Albert; Anderson Varejao and Sideshow Bob; Mike Brown and Grimace; Wally Sexyback and Zoolander; Delonte West and the guy from Prison Break.

6. OK, time for one picture: Paul Pierce and Beet. It’s the head shape and posture more than anything. And, obviously, Pierce has nothing on Beet’s grill. (I asked about five people here at work if it was too mean to post that picture, and they all said yes, but only after they stopped laughing. I’m not out to hurt P-Double’s feelings, just make you guys laugh. Hopefully you did.)

7. Anyone see Danny Ainge awarded The Sporting News Executive Of The Year trophy? That thing was about the size of an ashtray. Guess we shouldn’t be surprised that The Sporting News is behind it. Then again, if SLAM sponsored that award I’d lobby to present Ainge with an embroidered towel, presented by Robert Horry.

8. Oh, and I can’t believe I didn’t get to really talk about Hawks GM Billy Knight resigning. I’ve read so many completely wrong thoughts and theories online, but from what I know, the Hawks wanted to keep BK and he didn’t want to stay. That’s really all it boils down to. So now they need a new GM, and he’ll be the one to make a call on Mike Woodson’s future. I also read on a message board that the Hawks had signed David Anderson, which is completely untrue — they haven’t even made him an offer. But I guess that’s what message boards are for.

9. If you don’t know, now you know. I speak of this. What a game. Susan asked me yesterday what you do in the game, and I couldn’t even begin to describe it, so instead I told her that the night before I’d played for about an hour and had spent the entire time running around Brooklyn doing some errands for my cousin. The best of those errands had been going to collect a protection fee from a local businessman who refused to pay up. So I went around a corner and picked up a brick from a vacant lot, then went back to the business and threw the brick through the store’s plate glass window. At which point the businessman promptly emerged and paid up. I also went on a date with a local woman and took her to Coney Island to go bowling. We bowled three frames before I got bored with the bowling and we left. As we walked out, she said something like, “Aw, I was enjoying that, I wish we didn’t have to leave so early.” I wished I could’ve made my character say, “You want to be with me, you better get used to it, woman.”

To see just how realistic the game is, check out this set of photos made by someone with too much time on their hands. They took screenshots from the game then went around and took similar photos all over NYC.

10. Dan LeBatard wrote a guest post yesterday on The Big Lead and hit a home run, explaining the differences in old media and new media and how the sports journalism world is shifting.

I particularly enjoyed this passage…

But you know what happens when old people try to figure out what young people want and can’t? “Who’s Now?” happens. Or we just become entrenched and stubborn and resistant to change, the way newspapers have been for years, and we continue to cover hockey and write games stories the way we always have instead of covering the mixed-martial arts and even pro wrestling the way we should. We are older people telling younger people what they should like and then acting surprised when you mock it or rebel against it. Newspapers aren’t giving you what you want. We are telling you what you should want, and you are doing an exceptional job of ignoring us.

He couldn’t be more correct, at least when it comes to ESPN and the bigger outlets. Case in point: I can’t remember the last time I sat down and watched SportsCenter. A few years ago I tired of all the ranting and raving, so I just gave up. If I want to see highlights of something, I’ll either watch them online or maybe on ESPN News, although even that channel is starting to go they way of SportsCenter and feature more talking heads and gimmicks. I mean, wouldn’t it be awesome if there was a show with just sports news and highlights?

Anyway, one day last week the Braves played a day game that I didn’t get to see because I was here at work. I had followed along on the internet, though, and I knew the Braves had won a hard-fought game on a walk-off single to win their sixth game in a row. And I wanted to see the highlight of this happening.

I got home from work at 6:15 p.m., went over and plopped down in front of the TV and flipped on SportsCenter. I watched SportsCenter from 6:20 until 7:00 p.m., when the NBA Playoffs came on, and didn’t see any highlights from the Braves game. There was plenty of talk about all kinds of stuff, from the NBA to the Yankees (surprise!), but no highlights from a game that had ended about 90 minutes prior with a key walk-off single.

I haven’t watched SportsCenter since. They can hire Hannah Storm or Walter Cronkite, but they just lost one former die-hard viewer for a while.

11. With all my travels and such over the last week, I missed last Friday’s edition of NBA Friday with our man Joel Kimmel, the official illustrator of The Links.

“I started the season with an NBA Friday schedule where I planned to paint the best teams last and the worst teams first, according to how well I thought they would do,” says Joel. “I made a couple big mistakes where I painted New Orleans too early and Miami too late. I’m a fan of the Phoenix Suns so I was hoping to paint them last, but with their early playoff exit I had to arrange the schedule to fit them in. I decided to paint Amare.”

“I painted this piece following the shape and design of a basketball key where Amare’s portrait is in the circle at the top of the key. The two large cacti make up the sides of the key, the two birds are the two hash marks below the free throw line and the sun is the half-circle marking the restricted area for drawing charges. I thought it would all work nicely with an Arizona landscape.”

12. Finally, I leave you with the illest rapper alive, Mr. Eli Porter