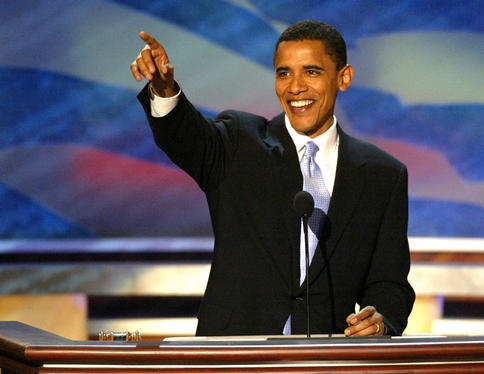 First of all, greeting from the SLAM Dome. My name is Lang Whitaker and I am the executive editor of SLAM magazine. You know about SLAM, right? We’re the world’s biggest and best basketball magazine. We’ve been around over a decade, we break news, we profile players, we have a website, a MySpace page, a Wikipedia page, the whole shebang.

Anyway…I’m writing you this open letter because we have no other idea how to get in touch with you.

And we want to get in touch with you.

Really, we do. Let me explain…

I’ve been interested in you for a while. I first read about you about three years ago in the New Yorker. Then, back in July of 2004, I wrote the following on our website during the Democratic National Convention…

I’ve been watching the convention every night, because I’m into politics and that stuff. I’ve been interested in Obama for a while, ever since I read this feature on him in the New Yorker about four months ago. Sure enough, he was really impressive. (And check the Bush/Barack anecdote in that New Yorker story.)

Since your speech at the DNC, I’ve watched with interest as your star has risen, from a little-known guy running for the Senate to a Presidential candidate with a very real chance of winning your party’s nomination. You’re releasing books, appearing on television talk shows, even popping up on unlikely magazine covers.

Then, a few months ago, a slew of stories started dropping about how much you enjoy basketball. As a basketball media outlet, we dutifully covered these stories. (And I even realized who you sound suspiciously similar to, if you smell what I’m cooking.)

With your basketball jones being publicly discussed, we thought it might be a good idea to see if we could get 5-10 minutes of your time for an interview in SLAM. We do a little section each month called Dime Drop where we talk to someone who is into basketball but doesn’t, strictly speaking, work in basketball for a living. We’ve had all kinds of people in Dime Drop, from rappers (Big Boi) to chefs (Marcus Samuelsson) to comedians (Dave Chapelle) to soccer stars (Tim Howard and Thierry Henry) to football players (Reggie Bush) to baseball players (Derek Lee) to musicians (Wynton Marsalis). As you can see, it’s a pretty diverse group of people, all with one thing in common: They enjoy basketball.

Which is why we thought you’d be a perfect fit.

So we started trying to make contact with you, via your official website, through people who claimed they had connections with you…I’ve even had friends who work in politics on the case, all to no avail. We’ve had multiple people working on this and haven’t heard even a peep back from your campaign.

A few months ago, I signed up on your website to receive email updates, thinking that perhaps I could find out some way to get in touch with you that way. Now I get emails from your campaign almost every day, but I still have no clue who to even talk to in order to get you on the phone.

And look dude — I mean, Senator — we understand you’re running for President and you’re probably kind of busy and all that, but we thought perhaps you would welcome the opportunity to have a forum in front of the 1.2 million readers we have each issue. Heck, we’ll even run the longer transcript or the audio here on SLAMonline.com, which will make even more eyes and ears available to you.

But you know what? A lot of our readers are going to vote. And the ones who can’t vote? Well, their parents vote, and their older brothers and sisters vote. And by 2008 (and 2012 and 2016), more and more of those young readers will be able to vote. I’m just saying…

In closing, I feel like I should point out that by inviting you to appear in the pages of SLAM, we aren’t endorsing you. We just thought you’d be an entertaining and educational interview, plus you fit right in with the whole basketball thing that we do. We’re not endorsing anyone — not yet, at least.

Anyway, I think you get our point and we’re sorry to have to do this so publicly, but we’re out of options here. Please let us know if you can find 10 minutes for us. We’d appreciate it, and I think about a million hoops-heads out there would enjoy hearing from you as well.

Thanks for your time.

PS: Please don’t make us have to call Kucinich.