Links: Charles Barkley Is A Dumbass 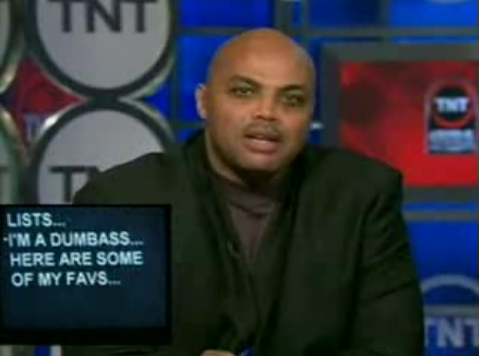 If you’re an NBA fan, you have to know that TNT’s “Inside the NBA” is can’t miss viewing. I’m talking about every minute of it, even as the clock ticks later and later — actually, especially as the clock ticks later and later, because Charles, Kenny and Ernie get punchier and punchier. The later it gets, the nuttier they usually are. And the funnier the show becomes.

I never tune away, which means I always catch the final segment, “EJ’s Neat-O Stat Of The Night.” The jingle and logo have a space built in for a sponsor, but for whatever reason they rarely have a sponsor.

On Monday night I was watching and noticed they didn’t have a sponsor, and I thought to myself, I wonder what TNT would charge SLAM to sponsor that segment for a night? The best basketball mag in the world has always been cool with the best NBA show in the world. If it was in the thousands, forget it. But I figured if it was in the hundreds, maybe I could scrounge up the change from the couch in our reception area or something.

So I sent an email to my main man Tim Kiely, who produces “Inside” and is the brunt of a lot of Chuck’s on-air trash talk. Tim liked the idea of SLAM sponsoring the segment. I couldn’t come up with a wacky stat today, but Tim and the amazing crew at TNT had a little something up their sleeves for The Chuckster.

And look what happened tonight…

(By the way, a big thanks to Ryne at Odenized for being on the lookout and getting this video up and running for us.)