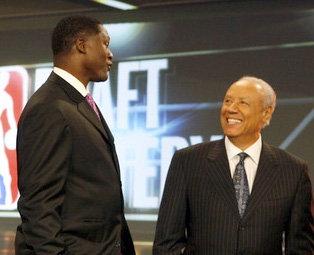 Well, it’s been about 18 hours since the NBA Draft Lottery, and to be honest with you, I still feel really good about it. Woke up this morning with a little pep in my step, even. And the Braves drilled the Mets last night. Just a good evening all the way around.

I had a fantasy last night as I was walking home from work that the Hawks were going to get the top pick, and I’d spend the next hour on my cell phone fielding calls from excited friends and well-wishers. But that didn’t happen. I did end up on the phone half the night, but the conversations were mostly like, OK, so what do we do now?

Before we get into the Draft itself, I suppose we should stop and consider Memphis, Boston and Milwaukee. The three worst teams in the NBA, yet none of them will get to Draft among the first three picks.

And you know what? Good. Milwaukee had the first pick two years ago and got them some Bogut. Boston is one of the winningest franchises in professional sports history, so they deserve a few decades of losing. And Memphis needs another year of being horrible so they can draft first in ’08 and take Derrick Rose.

“It’s about as disappointing as you could ever hope for. It’s like pitching pennies. It’s grossly unfair to the team, but I’ve said it before, I don’t think the lottery is fair. I never liked it. I don’t think it’s a good system at all, period.

Hey Jerry, if the grapes look sour and the grapes taste sour, well then…

If I was a Memphis fan or a Boston fan, I’d probably be upset. (Although if I was a Boston fan I’d look up at all those championship banners and remember that my team has been unbelievably lucky for a very long time.) But it is what it is.

Everyone knew how the lottery worked going into it. The Celts and Grizz rather obviously tried to skew the lottery by losing as many games as they could. They messed with the bull, they got the horns. it doesn’t always work that way (remember Cleveland’s tankalicious pursuit of LeBron a few years ago), but that’s how it shook out yesterday.

As a Hawks fan, I’m both elated and terrified. Yes, I would have loved to have had the first pick overall, and the second pick would have been great as well, but considering that going in we had a very real chance of finishing the night without a pick at all, ending up with the 3 and the 11 is more than fine.

(And there’s something poetic about the fact that both times Dominique has represented the Hawks at the Draft Lottery, they’ve actually jumped ahead of their slot but both times ended up picking third. Pretty representative of Nique’s entire career. I also thought it was hilarious that Nique and his nemesis, Lenny Wilkens, ended up on that stage together for the entire night. For you whippersnappers out there, recall that during Nique’s best season, when the Hawks had the best record in the Eastern Conference, Lenny traded Nique for Danny Manning. To say that Nique has had beef with Lenny ever since then would be an understatement.)

Let’s start with Portland. Oden would seem to be the move, since he’s a once-in-a-lifetime center. But they got the top center in last year’s Draft (LaMarcus Aldridge) and they have a pretty good power forward in Zach Randolph. Aldridge can’t play the 3 and neither can Zach. Do you move one of them and take Oden? Draft Durant and put him at the three? Draft Oden and tell Aldridge he has to be a back-up? Interesting situation they’re in.

And as for Seattle, Durant is basically a better Rashard Lewis, right? Do you let Lewis leave this summer in free agency and then wait a few years for Durant to adjust to the NBA, hoping he can do it fast enough for Ray Allen to still have something left?

As for Atlanta, well…

A few hours after the Draft I found myself thinking that surely Billy Knight would make two solid selections with the 3 and 11 picks. Then I immediately caught myself and thought, What am I thinking?

Being able to trust your team’s general manager is a very underrated luxury, maybe the best luxury for a fan to have in all of sports. I know because the Braves have John Schuerholz, and I have a complete and abiding faith in Schuerholz. He’s earned my faith. Conversely, Billy Knight has done nothing at all to make me believe in him. I don’t trust BK to make one good Draft pick, much less two good picks. I have no idea what he’ll do with these picks. I’ve heard he likes Julian Wright and Corey Brewer, and I like both of those guys. But third overall? And Mike Conley is good, but is he a third pick when you have a chance of still getting him (or Acie Law) at 11?

What would I do if I was the Hawks GM? Immediately get on the phone to Seattle. I’d offer them the 3 and the 11 and Seattle native Marvin Williams for the 2 slot. The Hawks were the youngest team in the NBA last season and the last thing we need are two more teenagers. Offer up that bounty to Seattle and see if they’ll bite. They could add three really good players. And after all, Lenny’s in charge — who knows what will happen?