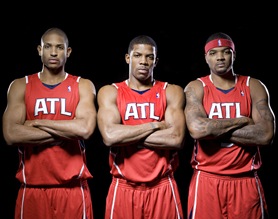 Here at the Highlight Factory for Game 4. Should be an interesting night. Both teams really need the win, and not sure who really needs it more. The Hawks are going with their “big” lineup tonight, which means Jason Collins gets the start, Marvin comes off the bench, and Horford and J-Smoove slide down a spot. Not really sure how this helps the Hawks, other than it gives them a big body to crash into Rose if he drives into the lane. It also takes Horford off of Noah. Those guys have known each other forever — they were roomates at Florida.

• When I was driving in, I saw a kid outside the arena wearing a FREE JEFF TEAGUE t-shirt.

• Before the game tipped, the Hawks’ president presented flowers to the mothers of a bunch of the Hawks players. Happy Mother’s Day, y’all!

• BTW, Billy Donovan is at the game tonight.

• At tipoff the crowd seems much more into it and pro-Hawks than they were for Game 3. Still see a smattering of Bulls jerseys throughout the arena.

• Hawks open with the same play they opened Game 3, that pin down for Joe Johnson. Only this time Joe knocks in a jumper from the top of the key.

• Tied at 6 early on. Hawks haven’t had to call a time out within the first minute, so I guess that’s something.

• Jason Collins gets a dunk and flexes on the rim a little bit, and PA man Ryan Cameron sings a little Guy: “Jam, oohh-ohh jam.”

• Collins picks up his second foul and Zaza checks in. Almost immediately, Joe Johnson crosses over Keith Bogans, who slides and appears to pull a hammy or maybe sprain an ankle. Hawks score, Bulls call timeout, and Bogans limps back to the locker room. Hawks up 16-13.

• Rose draws a shooting foul and goes back to the stripe. Bulls are getting to the line often already — they’re 7-8 from the line. Hawks haven’t shot any free throws.

• Josh Smith catches a step in front of the free throw line and drives to the rim. He scores and gets fouled, and hits the free throw. Rose misses a layup, and Josh Smith misses a runner but draws Boozer’s second foul.

• Bulls spring a 3/4 court trap on Jamal Crawford and rip the ball, and Gibson gets an open dunk. Next time down, Joe Johnson dribbles, waits for the trap, and hits Jamal for an open 18-footer.

• Just before the quarter ends, Gibson gets fouled and spins to dunk after the whistle. Zaza fouls him and gets hit with a T from Danny Crawford. Feels like a reputation call, though on the replay Zaza did hit him more solidly than it seemed at first. The Bulls miss the T,  though. Ball don’t lie.

• Second quarter begins and after a loose ball situation, Omer Asik gets an open dunk attempt. Joe Johnson fouls him to send him to the line, and somehow Joe appears to tweak his left elbow.

• Second quarter starts sloppy. Bulls reserves making Atlanta work hard, and the Bulls manage to take a 29-28 lead. All of a sudden the Bulls can’t make a shot, missing a few layups and short shots, and the Hawks get boards and get out on the break. Jeff Teague even does a pretty good Derrick Rose impression, going coast to coast at top speed and banking in a reverse layup. Hawks lead 32-29 with 8:43 left in the first half, timeout Bulls. Score seems to reflect the score the Bulls would prefer, but Atlanta seems to be much more emotionally invested in this game than they were in Game 3.

• Rose returns. Hawks come out of the timeout in a full court man-to-man. Korver misses a three, and Smoove gets the rebound, dribbles the length of the floor, does a spin move on Boozer, misses a layup, then gets his own tip in. Korver misses another three from the same spot, and Crawford hits a jumper. Bulls run the same play a third time in a row but this time go to Boozer, and he scores to cut it to a 36-31 Hawks lead.

• Dan Crawford calls a touch foul on Zaza, his third. With all the pounding and hacking that’s been going on by both teams, seems like a weird call to make.

• They come back down and Crawford calls Joakim for a foul off the ball. Danny Crawford is taking over.

• The Hawks get an alley-oop from Smoove to Horford that shakes the building, and then Rose answers with a layup that he misses, then dunks the follow-up. Whoa.

• Horford picks up his third foul with 4:49 left in the third. Zaza returns.

• With 4:01 to play, Joakim Noah hits a layup to tie it at 43. Joe Johnson answer quickly. Derrick Rose hits a three to put Chicago ahead 44-43. Hawks get an offensive three-second call, and Boozer comes down and Zaza draws his third foul, sending Booz to the bench.

• 2:29 to play in the half, and Bulls lead 44-43. Not sure if it’s being reflected in the box score or in these notes, but Josh Smith has played really well tonight. Yes, he’s 3-11 from the floor, but he leads everyone in minutes played and has 9 points, 7 boards, 3 assists, no fouls and no turnovers.

• And on cue, Smoove blocks a Rose layup, then finds Joe Johnson for a three on the other end. Hawks lead 47-46 with 57.5 left in the first half.

• Second half starts with the teams trading baskets. Smoove misses a three, then the next time down pump fakes and drives to the rim, drawing an and-one on Deng. Hawks up 52-50.

• Al Horford is so deliberate with his post moves. This time he got inside and dunked, but it was almost like slow motion. Hey, whatever works.

• Teague draws a foul on Joakim Noah in the open court by taking a hit and going down, then driving and scoring on the other end. Hawks push the ball back and Teague scores, pushing the Hawks lead to 56-50.

• Out of the timeout, the Bulls get Rose heading toward the basket and he crashes into Jason Collins and gets to the line.

• Next time down for the Bulls, Horford grabs the rebound of a Boozer miss and gets poked in the eye by Noah. It takes Al a while to sort of catch his breath, but as he runs back down court he and Jo exchange a stealthy handshake.

• Hawks go up 8 and Bogans answers with a three from the corner. After he hits the three he turns to the Hawks bench and says something. Probably just wishing everyone a Happy Mother’s Day.

• Rose gets back to the line and hits two free throws, making it a 60-57 Hawks lead. Horford misses a jumper, and then Rose misses a runner, and then the Hawks turn it over. Not exactly a great exhibition here tonight.

• Deng drives and draws a foul, makes both free throws to cut it to 60-59. Then it’s time for Kiss Cam. Highlight is probably when an older couple is spotlighted, and they each remove their dentures before kissing.

• Out of the timeout the Hawks run a nice play for Joe Johnson, and he bangs in an open three. 4:04 to go in the third. Rose answer right back with a two.

• Hawks go big and put Joe Johnson on Rose. Bulls match them and go big, sending in Asik and Boozer. Hawks force the Bulls to take a timeout.

• The Bulls get the Hawks to switch and Josh Smith ends up guarding Rose. Rose backs up and drives on him, and Josh spikes the shot to the floor with two hands. Josh gets rewarded with his first break of the quarter.

• Next time down Rose finds a cutting Asik, who dunks and manages to do a pull-up on the rim with getting T’d up. The Hawks try to go two for one but and up with Jamal Crawford missing a three from the corner over a double team, and the Bulls get a bucket from Boozer just before the quarter ends to put them ahead 69-67 after three quarters. Bulls ended that quarter with an 8-0 run.

• Fourth begins, Josh is back in. Rose hits runners on back-to-back possessions and gets an and-one on one of them. Josh Smith scores on a nice give from Joe Johnson on the other end, and Rose drives and scores again. Zaza manages to draw a foul on the inside and sends Brewer to the bench for Watson. Bulls lead 76-75 with 8:59 left to play.

• Hawks do a great job switching and chasing Korver and force Rose to miss a 15 footer, and on the other end the Hawks get Smoove a dunk on the inside to take the lead. Korver responds, and after a Hawks turnover, Gibson hits two free throws to put Chicago ahead. Smoove answers by missing a dunk but getting his own rebound and dunking it.

• Bennett Salvatore gets tired of waiting for the Bulls on an inbounds play and sets the ball down and just starts counting. The Bulls get it in to Rose, but he misses a long shot. Haven’t seen that in the NBA in a long time, the ref setting the ball down and counting.

• Out of the TO, Rose tries to hit Deng but throws it out of bounds.

• Hawks come back and Josh Smith catches on the baseline and faces up Boozer, then crosses him over and gets inside and draws a foul. Two shots: Good, good.

• Bulls looking a little disjointed on offense. So they give it to Rose and he draws a foul and scores. Misses the free throw. Game tied at 82. 4:59 left.

• Teague shakes Korver and hits Horford for a 9-footer.

• Rose flies through the lane and scores.

• Rose drives and Smoove gets a piece of his shot and grabs the board. Throws it out to Teague, charges into Korver (with no call) then drops it off to Horford for a layup. Hawks go up 88-84, 3:47 left. Timeout, Chicago.

• During that timeout they play “Eye of the Tiger,” and the crowd gets the loudest they’ve been tonight. Survivor must still make a mint off that song.

• Rose drives and crashes into Horford, no call. Hawks ball.

• Hawks burn clock and JJ misses a long two. Teague then rips Rose in the open court. Hawks reset and Smoove finds Horford inside for an easy two. Hawks go up 90-84. Remember a while back I said Smoove was playing great? Smoove has 23 points, 16 boards and 7 assists.

• Rose seems to draw a foul but…well, I’m not sure what happened. Bennett Salvatore blew his whistle. Well, they jump it up at midcourt and the Hawks get the ball back.

• Bulls hit a nice play to Deng out of the timeout. Cut it to 8. Teague breaks down the defense, finds JJ in the corner, and he hits Crawford for a three. And…that should do it.

• Wait, one more strange thing happened: With 18.3 left the Bulls called a timeout that they didn’t have. And a chant of A-T-L! broke out.