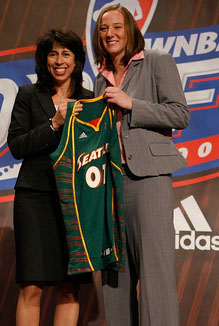 • News from Toronto, where the Nets and Raptors square off tonight. TJ Ford is apparently really sick. According to Sam Mitchell, Ford hasn’t eaten in three days. Please, please, please, one of the Nets (preferably Vince) needs to accuse the Raptors of faking this.

• Let’s talk WNBA. That’s right, WNBA! I’ve been to exactly one WNBA game in my life. I don’t hate the players and I don’t hate the game, it’s just that I’m usually overdosed on hoops by the time the NBA season ends. Yet even without my

proactive support, the W kicks off its second decade tomorrow night, and we actually have a long feature on the first ten years of the WNBA in the upcoming issue of SLAM. And I’m going to make an effort this summer to at least give the WNBA more coverage here on The Links.

Since we care so much about NBA fashion, I thought this story was worth noticing. Our friends at adidas, who took over the NBA uniforms last season, have re-designed all 13 WNBA uniforms. I’m told the new gear has “female flattering cuts and lines which enhance the player’s look while still aiding in performance.” The new jerseys also have a “racer back cut.”

(When I initially read that last sentence I initially thought it said “racier back cut,” which I perceived as oddly provocative of the WNBA.)

I’m told the new jersey design features an aesthetic “derived from bold tribal prints and ‘superhero’ patterns — i.e.: lighting bolts, stars.” I think I actually like the new Seattle Storm jersey (left), with the stripes and lines, better than the Sonics jerseys.

It’s pretty cool that they can do something like this — imagine if all 30 NBA teams all got new uniforms at the same time?

Also, we need to pick a WNBA player to become The Official WNBA Player Of The Links for us to follow all season. Your suggestions are welcome in the comments section.

• Was still thinking about that Horry three-pointer this morning and how on “Inside the NBA” last night, Barkley basically gave Marcus Camby a pass for leaving Horry open. (Camby was supposed to be guarding Horry, who had drifted out to the three-point line. Camby sagged toward the lane to provide help defense on a driving Tony Parker, leaving Horry wide open.)

I’m paraphrasing here, but Chuck basically said Camby made the correct play because big men are always taught to sag and help in the paint, and also because Camby is the Defensive Player of the Year and he might have been able to block Parker’s shot.

Well, that’s great and all, but Camby didn’t block Parker’s shot because Parker passed it to the guy Camby was supposed to be guarding. And when you’re guarding Robert Horry in the closing seconds of a close game, how in the world can anyone leave him alone behind the arc?

• A quiet end to an entertaining season in Washington. And it sounds like Brendan Haywood will not be missed next season.

• Avery Johnson is tired of Dirk’s whining. I picture Don Nelson being handed a printout of that article, leaning back in a chair with a Coors Light in his hand and chuckling softly to himself.

• Great long story from Alex Wolff about the importance of video tape to NBA teams. Save this one for your lunch hour.

• A rundown of the rubber bands from the Cavs/Wiz series. I still have one from Lamar Odom (back when he was on the Clips) that says “Cathy,” his mother’s name, around the lamp on my desk.