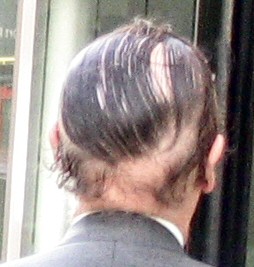 players. He’d never heard the term before, so one of his teammates and I had to explain the concept. I found it hard to believe someone had never heard of a combover. Cultural differences can be vast, I suppose. Still, you’d think everyone would know what a combover is.

• Saw a few exciting games this weekend in the NCAA Tournament. That Ohio St./Xavier game was particularly good. I figured the Buckeyes were dunzo, especially after Oden fouled out and Xavier started draining threes.

At some point on Saturday, my wife asked me why I was yelling at the TV so much. I didn’t realize I was doing it, but I was. I wrote about this some in my SI column today, but I was really shocked at how poorly most of these teams understood basketball. And I mean that in the sense that I can’t count how many times guys didn’t take advantage of opportunities to make smart basketball plays. Ohio State, for instance, would run a pick-and-roll, get Oden switched to a smaller player and then, as Oden was posting up his smaller dude inside, some guard would jack up a long three-pointer. Just dumb, dumb basketball.

And Ohio St. wasn’t the only culprit, just the most visible. A lot of these college teams were playing like this. That Singletary guy on Virginia might be pretty good, but give up the ball, man.

One team I loved watching was Tennessee. Chris Lofton is a little trigger happy, but I love the way Ramar Smith ran the team and the way Dane Bradshaw played within himself at all times. They move the ball to open guys, throw it into the post, play good full-court defense. There’s something about Bruce Pearl that makes me feel kind of nervous, but they’re a very well-prepped squad.

Kobe took 35 shots against the T-Wolves, more than the other four Lakers starters combined. Against the Blazers he jacked up 39 shots, two less than the rest of the Lakers team combined.

Why is he playing this way all of a sudden? As someone once told me when I asked why Peter Vecsey is always ripping people in his column, “I have no idea. Sure is fun, though.”

• Quote of the Day comes from Isiah Thomas, who said of Eddy Curry: “I’m not a drug addict, but he’s my No. 1 drug. If it got close or tight, that was the button I push. I can’t help it. It’s like I’m Pavlov’s dog. I’m pushing his button.”

Should we tell Isiah that Pavlov’s dogs were actually conditioned to salivate in response to various stimuli, not to push a button or insert Eddy Curry into a lineup?

• Yao Ming didn’t follow the Chinese basketball finals online because he didn’t want to shell out $10 for the internet in his hotel room. I feel you on that, big man. Here’s a little trick I’ve learned spending time on the road: Next time find a Panera Bread Company — they always have free wireless.

• After 13 straight wins, the Spurs dropped back-to-back games against the Bucks and the Celtics. And now Manu GINOBILI! is calling dudes out. Go ‘head, Manu.

• I love Sonics coach Bob Hill, because he’s just endlessly entertaining. After the Sonics missed a last-second shot to win against Golden State on Saturday night, Hill reviewed the tape and let everyone know it wasn’t his fault they’d lost:

One thing I love about Braves coach Bobby Cox is that he’s relentlessly loyal to his players. If a guy misses a sign or doesn’t execute on a play, Cox will never, ever publicly blame the guy. Which is why all his players love him and play so hard for him.

• Some interesting names being thrown around in Charlotte to replace Bernie Bickerstaff. Paul Silas? How about Derek Anderson?

• Brian Hill was so mad at Dwight Howard for being late to the team plane that he tried to get the pilot to take off and leave Dwight behind, even as Dwight arrived and was rushing for the plane.