Links: Kobe, Where Do We Go Now? 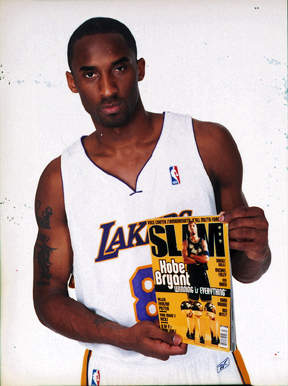 You didn’t hear? Kobe wants to be traded. The question now is, where do you send him? Let’s go through all 29 other teams and figure out the most likely destinations, and who could give up what for Kobe. Call me Sam Smith.
One thing to remember: Kobe has a no-trade clause in his contract, which means he would have to approve any trade. If, as he’s said, his main interest is to go to a contender (or a team willing to spend cash and rebuild), that rules a lot of teams out.

ATLANTA: Here’s one that works: Marvin Williams, Josh Smith, Speedy Claxton, Zaza Pachulia and the third pick in the Draft for Kobe. Hell, Billy Knight, throw in the 11 pick, too. This would give the Lakers five or six young pieces to build around and turn into a run-and-gun team. It would not, however, give them much star power. The Hawks could team Joe Johnson and KB24 and Kobe would own the South. The Hawks would also be a big man away from contending in the East.

BOSTON: A trade for LA-native Paul Pierce, Bassy, Gerald Green and the number 5 pick would work. Then again, the Celts already have told us they have a Playoff team, so why break that up?

CHARLOTTE BETcats: Adam Morrison, Ray Felton and Gerald Wallace (who they’d probably have to sign-and-trade) plus the 8th pick. This could return Kobe to the city that originally drafted him and allow him to play for Michael Jordan. Would give the Lakers three really good young guys. The BETcats would suck, though.

CHICAGO: The Bulls are supposedly one of Kobe’s preferred destinations, but they’d have to give up a lot to get him since Gordon and Luol are still on their rookie contracts. In fact, Gordon, Luol and Tyrus Thomas still isn’t enough. They’re all nice players, but if I’m the Lakers I need a superstar in return for my superstar, and none of the Bulls that would be available are superstars.

CLEVELAND: I just can’t see the Cavs having the chips to team Kobe and LeBron, and I can’t see either of those guys wanting to share the spotlight (or the ball) in Cleveland.

DALLAS: Now this would be interesting. You know Mark Cuban would love to throw the Mavs into the mix, but short of giving up Dirk, I don’t think LA would be interested. If you’re the Lakers and you’ve got to rebuild, do you consider Dirk as being past his prime? It’s insane to think you wouldn’t want to trade for the reigning MVP, right? How about Kobe and VladRad for Dirk and Jason Terry?

DENVER: Yeah, don’t think Kobe would want to go back to Colorado. Next!

DETROIT: I don’t think the Pistons would be interested in breaking up what they’ve got going.

GOLDEN STATE: This is the first team in LA’s division, and while it would be fun to imagine Kobe and Nellie together, I’m not sure the Lakers would move Kobe within the same division. They might, sure, but not if they know what’s good for them.

HOUSTON: How about this: Kobe for T-Mac, with Houston’s 26th pick. The Rockets would get another great swingman to team with Yao, while Tracy would have a bigger stage to shine on and give the Lakers a player who would work well in the Triangle offense. And don’t think T-Mac wouldn’t like being in L.A.

INDIANA: The Pacers have definitely reached the point where they need to do something drastic, but the problem is that Jermaine O’Neal and Kobe make the same salary. And if I’m trading Kobe, I want multiple pieces in return. Indy doesn’t even have a first rounder this year to throw in.

CLIPPERS: No way the Lakers let Kobe stay in L.A.

MEMPHIS: I initially thought there was no way the Grizz had the chips to make this happen, but what about this: Pau Gasol, Stromile Swift and the 4th pick for Kobe. The Lakers could conceivably come away with Gasol, Stro and Horford or Brewer.

MIAMI: Short of Dwyane Wade, if I’m L.A. there’s nobody on Miami that I want.

MILWAUKEE: Redd and Bogut for Kobe works, though I have a feeling Kobe will not be wanting to go to Milwaukee.

MINNESOTA: Again, if I’m Kobe I’m not going to Minnesota.

NEW JERSEY NETS: If LA wants a marquee name, they go get Vince plus Richard Jefferson. Not sure how well the Triangle works when the shooting guard refuses to drive to the basket. The Nets could team Kobe, Kidd and Krstic. Terrified to think of what nickname the New York Post would give those three.

NEW ORLEANS HORNETS: Kobe’s always talked about his respect for Byron Scott, and the Hornets have made a lot of moves in recent years. But if I was LA, I’d want Chris Paul and Tyson Chandler, and they’re not even close to Kobe’s seems like an interesting fit, though.

NEW YORK KNICKS: Tell the truth: You know Kobe would love to come to NYC and you know Isiah would kill to have him. But the Knicks are dealing with such ridiculous salaries that it’s pretty much impossible to do. Or think of it this way: If you’re the Lakers, which Knicks player would you want? Yeah.

ORLANDO: Again, nothing to deal with, other than Dwight Howard and some assorted junk.

PHILADELPHIA: Even though Kobe’s from Philly, here’s another team without the chips to make a move.

PHOENIX: Here’s Phoenix’s chance to move Shawn Marion, though again, it’s within the Division. And I don’t know if the Lakers could build everything around Marion — isn’t he more of a complimentary player?

PORTLAND: Oden and Roy (plus Lafrentz for salary purposes)? I don’t think Portland would be willing to give up their rebuilding plan for Kobe.

SEATTLE: Another interesting destination. If LA wants a name, there’s that Durant guy. Throw in Ray Allen to make the salaries match. Hmm. Would Kobe like playing in Oklahoma City?

TORONTO: If Kobe wants to play in a cosmopolitan city with a top GM and a coach who mentored him early on, here’s the move. But if I’m the Lakers, Toronto doesn’t have enough to make me give up KB24.

UTAH: Kobe and Boozer share the same agent. Would Utah give up Deron Williams and Kirilenko to add Kobe?