Links: Looking Back at the 2009 Playoffs 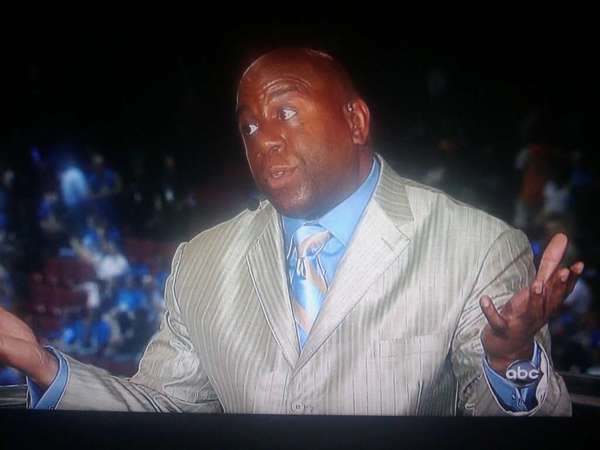 Fri-Day! Yes! And we just finished working on the 2009 Championship cover with the Lakers for SLAM 131. It took us a while, but I think we finally found a suitable cover image of Sasha Vujacic. Whew.

Let’s start by polishing off the Josh Smith post I did on Wednesday. There’s a couple of things I’d like to clarify before putting that story to bed:

1. A couple of people emailed or twittered to congratulate me for “pwning” Chad Ford with my post. Well, I don’t think I did that, and I honestly wasn’t trying to do that. I was simply trying to destroy the false rumor that Chad Ford printed. I like Chad and think his NBA Draft coverage is phenomenal. But this rumor was not only wrong, it was basically improbable, if not impossible. And that’s what I was trying to get at.

2. A few people swore up and down on blogs and in the comments section on AJC.com that I was wrong about Josh’s BYC status. I wrote that it ended in mid-August, one year from when the Hawks matched the offer sheet Josh signed last summer with Memphis.

I am to a salary cap expert what the Hawks are to victory parades. So before I wrote anything, I went to Larry Coon’s detailed NBA Collective Bargaining Agreement FAQ and read as much as I could pertaining to Josh’s situation, particularly his BYC status, which is written thusly: “A player remains a base year player for six months, or until June 30, whichever comes later.”

As a result, a bunch of people thought I was wrong about the mid-August date. But according to everyone I spoke to while reporting this stuff, Josh is a BYC guy until mid-August. Why? Because the Hawks have Josh’s Bird rights, because the Hawks drafted him and Josh has been with the Hawks for more than three years. So it runs until mid-August, one year from when he signed the deal, same as Chicago had with Deng, same as Philly had with Iguodala, same as Cleveland had with Varejao.

3. Rock from the site Waitingfornextyear.com wrote with a good point:

Going back to Smith’s BYC status, I think that would actually work in the Hawk’s favor if they truly wanted to trade him. A BYC player’s trade value is defined as the greater of the last year of his last contract or 50% of the first year of his new contract. That means Smith’s trade value would be $5 million (50% of his new contract) plus $1.75 million for his trade kicker. This means the Hawks could trade Smith’s $10.5 million contract for the upcoming season, but would only have to take back $6.75 million, saving them $4.25 million this year.

Yes, in a general sense. (Although his kicker would still be 15-percent of his contract, so about $7 million, not $1.75 mil). Trading Josh Smith as a BYC player would immediately lessen the financial obligations of the Hawks and clear up money to be used for free agents or overdue bills or whatever. HOWEVA!, what the Hawks would be doing in that scenario is gaining cash but basically throwing away more cash and value. Trading someone, anyone, for 50 cents on the dollar makes no sense at all unless your team is completely and totally bankrupt. While the Hawks may not be spending cheese like the Mavericks, they also aren’t in dire straits. (At least, as far as I know. At least the last check I got for my Hawks.com column cleared.)

Another issue with that issue is that while Josh’s contract averages about $10 million a year, from what I understand, Memphis sort of back-loaded the deal, so Josh only made about $6 million last season, which means his trade value as a BYC player would be closer to $3 million. So you’re really not clearing much actual salary.

• We’ll get to the Draft on Monday, but I wanted to take today and go back through some of my personal highlights of 2009 Playoffs, via my Twitpic account. Some of these I took in person, some I took off my TV, some I might have linked to in the past, but all of them ran on my Twitter feed over the last few months. Let’s go chronologically…

OK, this was actually about a month before the Playoffs started — during NBA Green Week! — but it still cracks me up. I linked to it from SLAMonline previously, I’m almost certain, but it still might be my favorite picture of the season. The Nuggets have the ball in transition, as Melo pushes it up the right sideline…but check out JR Smith on the bottom right. “I’m open! Guys! Guys! I’m open! Come on, swing it! Guys? Guys!?”

This was the next-to-last game of the regular season, a game Boston won 100-98 when Pierce made a last second shot. It was a boring game, with Boston using their second team for most of the game. At one point in the fourth quarter, with the game close, the TNT cameras cut to Pierce on the bench…and he yawned.

One of my jobs here at SLAM is to proofread the copy for each issue of the magazine. I’ve done this so often over the last decade that now I find myself constantly catching typos or screw ups on TV and in other magazines. (Why don’t I catch them in The Links? Just trying to beat you to the joke.) This day I was watching the opening game of the NBA Playoffs between the Celtics and Bulls, and ESPN posted a graphic about how the Bulls assembled their teams. They highlighted Bulls reserve point guard Anthony Robertson. The only problem is his name is Anthony Roberson.

From the same game, I noticed this sequence and thought it was kind of funny. I posted these pictures separately, in order from top to bottom. The Bulls had the ball, in transition, and it went to Ben Gordon on the wing. Eddie House immediately closed out on Gordon. But look in the corner — Kirk Hinrich standing there wide open, with his defender, Big Baby, standing in the paint. So what does Gordon do? Check out pic number 2: He drove it on his own against House. By that time he made a move, Big Baby had caught up to Hinrich. And you think Hinrich was excited about getting ignored there? Look at his body language — he actually has his hand on his hip.

I took this in Miami before Game 3 of the Hawks/Heat series. Josh Smith has a long history of getting into minor skirmishes with Jamaal Magloire, so before Game 3, Hawks guard Flip Murray borrowed a pen and piece of paper and stuck this on Smoove’s locker while Josh was in the back getting taped up. When Josh returned, Flip claimed that Magloire had entered the Hawks locker room and left this for Josh. Josh believed this for about zero seconds.

Guys dress weird during the regular season all the time, but the postgame press conferences being televised during the Playoffs makes it much easier to spot questionable outfits. Here Rajon Rondo dresses like Huckleberry Finn.

And while we’re talking about outfits, Chris Webber always dresses sharp, but we need to teach him how to cinch his ties all the way to the collar.

During Game 1 of the Hawks series against Cleveland, while hustling after a loose ball, Josh Smith took out ref Bill Kennedy. Looks like they’re posing for the cover of a romance novel.

On ABC’s pregame show before Game 2 of Denver/LA, there was this odd moment where Stu Scott and Mike Wilbon were on set, while Magic and Jon Barry seemed to be making a break for it. Someone must have cut one, right?

Then, during Game 2, Kobe beat a box out by Dahntay Jones by giving him a forearm shiver to the back. There was no foul called on this play.

During Game 5 of the Eastern Conference Finals, Stan Van Gundy inserted Tony Battie into the game. The camera followed Battie as he jogged to the scorer’s table to check in, and as he went out on to the court, he reached up, spit a piece of gum into his hand and stuck it on the scorer’s table.

And finally, here is the suit Magic Johnson wore on air for Game 5 of the NBA Finals. This photo was not touched up or altered in any way. I’m pretty sure that suit was electric.

• Moving on, I know it’s only June…but we’ve got Early Muscle Watch™ spottings!

Also, Linkstigator Ken passed along this link about James Singleton, who has allegedly added a more traditional 10 pounds of muscle.

This is the earliest start to Muscle Watch™ that I can recall. Worth keeping an eye on. As always, if you see Muscle Watch™ updates anywhere, email me with “Muscle Watch” in the title.

• According to TMZ.com, Lakers owner Jerry Buss skipped the Lakers’ victory parade in order to play poker by himself at a nearby casino. That’s dedication. Then again, you can’t play poker alone, can you? Or is that how he got so rich, he just plays poker against himself? So he always wins!

• Next time I need a flash drive, I’m totally copping one of these.

• Via my main man Jimmy Traina’s Hot Clicks on SI.com, here’s a great video to get you hoops fans in the mood for what could be a soggy US Open this weekend…

• Have a great weekend everyone. Oh, and don’t forget Sunday is Father’s Day, so be sure to send your best to Shawn Kemp.

Catch you guys on Monday…