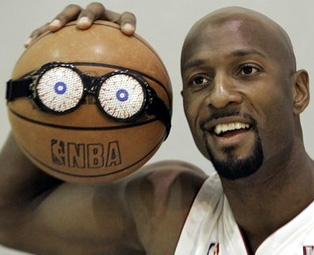 And so it begins. That’s right, the 2007-08 NBA season is officially underway.

Players reported to training camp yesterday and underwent the most basic of drills: Media Day, during which they take their head shots for the season and then, for whatever reason, usually get tricked into posing in weird positions.

As we do every season here on The Links, let’s take a look at some highlights from camps around the NBA…

• “Good grief Emeka, how’d you get it stuck so far up in there?”

• Ladies and gentlemen, the new GM of the Los Angeles Clippers, the Godfather of Soul, Mr. James Brown!

• “I remember it like it was yesterday. Nam. Explosions all around us, as we nestled down in the mud and prepared to wait out the night…”

• “Holy crap! A gun fell out of that pillowcase!”

• Fabio has returned to Charlotte. I can’t believe it’s not butter.

• Reed Richards, a.k.a. Mr. Fantastic, has high hopes for the Pacers this season.

• I have no idea who this person is but he is now one of my favorite players in the NBA.

• This season, in the role of Mike Bibby, Jason Biggs! (And check Bibby’s WWJD tattoo! I’m pretty sure J wouldn’t D that.)

• Raptors coach Sam Mitchell began the season by instituting a strict relaxation program for the Raptors.

• Was anyone else aware that the Celtics signed Vlade Divac this summer?

• I love this country!

• Alonzo Mourning warned his teammates about the dangers of marijuana use.

• Bobby Jackson is now so old that he has to be dusted off before each photograph.

• Wow, Andrew Bynum sure has changed.