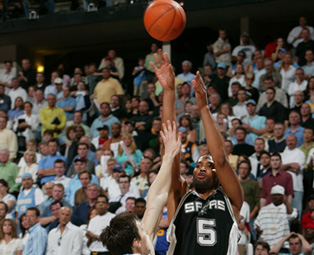 Hello, fellow night owls. If you’re like me, you’re awake right now because you just sat back and watched about 6 hours of NBA action. And most of it was really, really good. Speaking of really good, it was really good that I didn’t even know the Wizards/Cavs game was on tonight, because I might have been tempted to watch a little of it. As it was, I had no idea the game was occurring until TNT did a live cut-in at halftime of the Utah/Houston game.

Not surprisingly, the Cavs continued cruising toward the postseason. At some point they have to turn it up a notch, right? I know they were coasting through the regular season, but they still seem kind of unmotivated.

I caught the second half of Denver/San Antonio, but I didn’t really take notes (for public consumption, at least) because I know our man Cub Buenning was in the house in Denver and will have extensive notes tomorrow. I do enjoy watching the Nuggets on offense, because there’s so many factors at play there. When they’re running they can score easily, but in the halfcourt they’re all over the place. Melo can score over pretty much anyone with that midrange J, and Iverson with making his diagonal dives to the basket they’re a very hard team to stop. Popovich was emptying out the kitchen sink last night — playing man, zones, doubling, showing, etc. What offed the Nuggets was down the stretch when they had to play halfcourt, and the Spurs mostly shut them down.

For old time’s sake, when Steve Blake nailed that long two at the end of the game, it was fun to hear Kevin Harlan start ranting and raving about Blake hitting a huge three. Meanwhile the Denver score only went up by two points and the refs could be seen on the TV signaling that it was only two. So Denver was still losing. But Harlan gave it the old college try.

And then the Spurs got straight gangsta. San Antonio was up 1, 90-89, with the ball at halfcourt and 35.5 left. What do you do? Play 2-for-1 and hope that you can get a good shot up in time to leave yourself time for the final possession? Do you run the shot clock all the way down and hope you can make something to push your lead? Or does Denver foul right away?

Well, the Spurs threw it in to Tony Parker. He dribbled right at the rim and threw it out to Robert Horry, lurking behind the three point line, left alone by his defender, Defensive Player of the Year Marcus Camby. And Horry had no remorse — he nailed that three and put San Antonio up 4 with 30 seconds left. The lesson we learned? When Horry is open, screw the clock.

Anyway, I took notes while watching Utah and Houston. A few random thoughts…

• You know how they run all those ads about “TNT, we know drama”? How can they not have an ad featuring Johnny Drama?

• Judging from Charles Barkley’s outfit tonight, he’s at the bottom of his suitcase. Last time I saw a white coat paired with a blue shirt was at the barber shop.

• The Houston arena was a little over half full and rather quiet at tip-off. TNT is giving us Matt Devlin on the play-by-play. I don’t know anything about Matt Devlin, but from the smooth way he talks I think he’s running for some sort of public office.

• I went into this game completely impartial between Utah and Houston, but within about 5 minutes I was rooting for the Jazz. You old-school Linkstigators might recall a few years back when we selected an overachieving Jazz team as The Official Team of The Links. Since then they’ve added a lot of talent, and I kind of just stopped caring about them. (To be honest, it was when they cut Ben Handlogten, but that’s really just pettiness on my part.)

It was fun to kind of rediscover the Jazz tonight. They’ve got a lot of really good players, but nobody as agile as Tracy McGrady or as big as Yao Ming, so they spent the night scrapping and clawing and trying to stay in it. The most fun match-up for me to watch was Yao against Carlos Boozer. Boozer wasn’t Yao’s primary defender, but he ended up helping out on him frequently (and took an elbow to the face for his troubles).

Whenever Utah had the ball, Yao guarded Boozer. Boozer couldn’t go through Yao, so he employed dozens of tricks to get his shots off. Sometimes he’d sprint past Yao. Occasionally he’d pump fake and drive. Mostly he tossed up a variety of fadeaway teardrop jumpers that seemed to scrape the sky. Boozer going against Yao reminded me, of all things, of baseball, when a crafty old pitcher who has lost his fastball has to pitch to a power hitter. Boozer may be a junkballer, but he was incredibly effective. He reminded me of Terry Cummings.

• I don’t know what other issues he has going on, but I saw Andrei Kirilenko set up in the wrong place on offense twice in the first half. Who does he think he is, Salim Stoudemire?

• Hustle play of the night was from Shane Battier, who drilled a three on one end then ran back and took a charge on the other end. He actually made a lot of smart plays all night, which allowed Devlin and Mike Fratello to repeatedly rave about how amazing he is. Fratello didn’t mention that he traded Battier away from Memphis last summer.

• It’s always interesting to me to watch Matt Harpring play, because I remember seeing him play in college. At Georgia Tech, Harpring was basically a big forward who could score from anywhere. Since making the NBA, he’s molded himself into a great back-up swingman who can shoot, pass, defend and, most importantly, doesn’t hurt your team when he’s on the floor. Basically, he plays within himself at all times.

I’m not trying to say that Harpring isn’t talented, but I don’t understand why more basketball players, especially good college scorers, don’t focus on becoming a just a good complementary player. So many of these dudes need the ball in their hands to be effective, which unless you’re a superstar is usually a solid recipe for a trip overseas or to the D-League. Yet by sublimating himself and actually being a team player, Harpring has earned over $24 million in the NBA, with more to come. A lot of money, or a lot of points? I know which one I’d choose.

• What’s going on with Gordan Giricek’s hair? He kind of reminds me of a younger Robin Colcord from “Cheers.”

• When I saw T-Mac grab his back and limp off the floor, I feared the worst. That’s just how it is with Mac nowadays. Made me wonder whatever happened to that faith healer that Charlie Ward brought in.

Injuries are a weird thing in the NBA, because we hear so often about a guy battling a sprain or a strain — anything that’s not really quantifiable — and we think it can’t be bad enough to keep someone from playing ball. I used to think that, too, until I met Pau Gasol.

I was in Memphis to interview him a few years ago, and Gasol had sprained his ankle two days before I arrived. The day I was there, Gasol limped through practice and then came over to talk to me. While we spoke he iced his ankle through his sock. When we finished the interview, I asked about his ankle and he asked if I wanted to see it. Sure, I said. Gasol stripped off his sock and his ankle was a mess — swollen and puffy, with a bruised ring of hunter green circling his ankle. It hurt me just to look at it, yet Gasol was back playing two days later.

All that to say sprains and strains are no joke.

• Derek Fisher might have the most aesthetically beautiful jumper in the NBA.

• For most of the first half, the Rockets made no real effort to pound the ball in to Yao, which was crazy because Utah had Memo Okur guarding (well, mostly not guarding) Yao. It was a close game, and when Houston finally decided to get Yao involved, he scored three straight layups. On the fourth possession, Jerry Sloan sent a double team and Yao found a wide-open T-Mac for a three. Tell me again why they don’t go through Yao more often?

• How about this trade? Rockets send Shane Battier to Utah, where he can help them stretch the floor and do all his glue guy things, and Utah sends Andrei Kirilenko to Houston, where he can play power forward and get all active once again.

• Another thing I love about the Jazz is their offense, because they are always moving, always cutting, always playing with a purpose. On one play Kirilenko ended up at the top of the key isolated against his defender, and the other Jazz players all kind of moved back out of the way. You see this al the time in NBA games, and Houston does it nearly every time T-Mac has the ball. But Kirilenko dribbled once and then started yelling and waving at the other Jazz players because they weren’t running the offense.

• T-Mac’s dunk on Kirilenko was nuts. He’s an amazing offensive player, sure, but he really throws their offense into chaos because he doesn’t move the ball so well, at least not until he’s up in the air about to shoot, and then he’s great at hitting the open guys.

• Anyway, it was really a great game. What ended up killing Utah down the stretch was that they had to rely on Harpring and Fisher to score, because they don’t really have any guys who can create their own shots from the perimeter. And Harpring and Fisher are nice players, but they aren’t fourth quarter, crunch time guys. For Utah to hit the next level, they really need a good two guard to team with Williams. Houston won this game because they had T-Mac and Utah didn’t.

That’s all I got. Your turn…