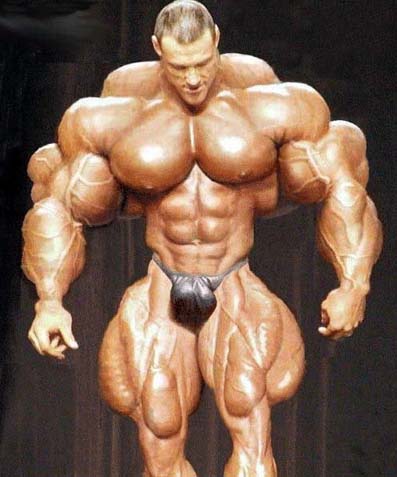 Linkstigator Garrett points out that up in the T-Dot, Andrea Bargnani has added “12-14 pounds,” much of it “muscle.”

Steven writes that LaMarcus Aldridge has added a disappointing 4 pounds. Jerome James adds that much each day.

Someone (I can’t remember who, sorry) emailed and pointed out that Suns forward Alando Tucker has hit the magic number: He added 15 pounds of muscle.

I heard that Josh Smith has added some size, so I emailed him and he said he’s gained “maybe 10 pounds of muscle.”

But thus far, the runaway winner of Muscle Watch 08 appears to be Utah guard Ronnie Brewer, who — and this is according to Jerry Sloan, so take it for what it’s worth — has added “between 20-25 pounds of muscle mass.” Twenty five pounds!! This is groundbreaking; there’s really no other way to look at it.

With that, let’s kick it old school and hit The Links…

QUOTES OF THE DAY
“He told me there were some other guys they wanted to bring in. He said that was the direction they wanted to go, but he’d let me know if that didn’t work out. I thanked him for the honesty. I said, ‘You’re a man, and I’m a man. No use pushing it.’” — Robert Horry, on the call he received from Gregg Popovich that the Spurs weren’t interested in having him in for training camp.

“It might’ve been lucky for him [missing practice]. He might’ve died otherwise. He was throwing up and everything. It’s a great way to lose weight.” — Mike D’Antoni, on Eddy Curry checking into the hospital with a bacterial infection.

THE LINKS
• I love that Phil Jackson is already pulling strings in L.A., talking about having Lamar Odom come off the bench, which Lamar doesn’t sound so enthused about. Maybe instead of getting stars shaved into his head he should get metal folding chairs?

On any other team, with any other coach, this would probably blow up into something that would have negative repercussions. But don’t you just know Phil Jackson dreamed this up two months ago while fly fishing in Montana as a way to get Lamar motivated and to take the spotlight off everyone else on the Lake Show?

• Spencer Hawes is no dummy. Love this about how Reggie Theus is making the Kings players do a “sprint test,” which sounds like it’s actually just a bunch of suicides. And as anyone who’s played organized basketball knows, there’s nothing worse than suicides. Hawes says he can’t do the “sprint test” because “the continued sprinting like that is something where, when I did it last year, it put more pressure on my knees than just playing basketball and, I felt, more than any other drill we did or any other game scenario we did.”

The Kings are supposedly fining Hawes for each day he won’t run, and he’s the only Kings player who’s refused to take the test. He should just run it, and if he gets hurt sue the Kings. That would be pretty cool if a second-year player ended up owning The Palms Hotel and Casino.

I still have nightmares about my high school coach my senior year, who used to make us run unbelievable amounts of suicides. I can’t remember all the details, but at the end of every practice, Coach would put like 20 minutes on the scoreboard and turn it on, and then when the seconds were at 00 we’d take off on a suicide (baseline to free throw line and back, baseline to halfcourt and back, baseline to the other free throw line and back, baseline to the other baseline and back). Everyone on the team had to be finished by the time there were 20 seconds left. If we all finished in time, we’d get a 20 second break and then have to take off at the next 00. If just person didn’t finish in time, we all had to run that particular lap over again. We had one guy on our team who was about 6-6, 270, and he could never finish them on time, so the rest of us must have run at least 300 extra suicides that year thanks to him. I’m still mad at that guy.

• One of my favorite stories today is this tidbit in the Minnesota Star-Tribune regarding the always alert GM Kevin McHale:

The Wolves are back in pursuit of free-agent guard Shaun Livingston. On Monday, Kevin McHale said Livingston’s agent told the Wolves that his client would sign with Miami, but Heat President Pat Riley on Tuesday called Livingston’s acquisition a “dead issue.”

So you’re telling me that Kevin McHale may have been tricked by someone’s agent? Or is that just how bad the L-Wolves are these days, that a guy who’s leg turned into E.T. would rather just lie about signing with another team than go to the L-Wolves?

“Hey Shaun, it’s your agent. Yeah, so the T-Wolves are really interested in signing you. No, no, no, the Minnesota Timberwolves. No, they’re in the NBA, they’re not a WNBA team. Oh. OK. Got it. OK, so I’ll just tell them you’re signing with, um, let’s just say the Heat, OK? There’s no way in the world McHale’s going to call Riley. And I don’t think Riles gets reception out on his boat, anyway.”

• Ben Gordon has no interest in making $8 million a year from the Bulls. According to the Sun-Times, the Bulls have offered him 6 years for $58 million, while Gordon is asking for 6 years at $75. Hey, they’re only $17 million apart. That’s pocket change for an NBA player…unless you’re a six-foot-tall shooting guard.

• Did anyone notice who’s in training camp with the Cavs? Michael Dickerson, the former (Vancouver) Grizzlies guard who, as we wrote about in SLAM 83, retired a few years ago due to a severely strained groin (ooowwwwwwwwwww!) and moved to Seattle, where he’d turned into a hoops version of Ricky Williams and was living in a house with 10 pit bulls while burning incense and meditating and stuff. But now he’s back at 33 years old, the latest signing from mastermind GM Danny Ferry. These kinds of shrewd moves will totally convince Bron to stay in Cleveland long-term.