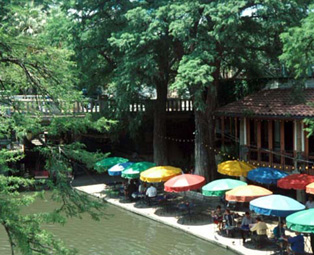 SAN ANTONIO — We are here, and it is hot. Really hot. Like, triple-digit hot. So there may be a lot of sitting around in the hotel room to come over the next few days.

Woke up this morning at 6:00 a.m. in NYC, and met SLAM’s Ben Osborne out at JFK airport. Last year’s trip to the airport was a complete mess, after I overslept and ended up basically sprinting to the gate to make my flight on time. This year’s was much less eventful.

We’d looked into all kinds of flights from New York to San Antonio, but there was nothing direct. Then we noticed we could fly JetBlue direct from JFK to Austin, Texas, which is about an hour outside San Antonio. So that’s what we ended up doing.

At the airport I’m pretty sure I saw Stan Van Gundy. I was 100-percent sure it was him but Ben started talking me out of it. We also couldn’t figure out why he’d be in New York if he was accepting the Orlando job and had just interviewed in Sacto. Ben thought maybe Van Gundy was a big JetBlue fan, so much so that he flew from Sacto to JFK and then was getting on a flight to Miami. I don’t think so. But I’m pretty sure it was him. I guess it could have been Ron Jeremy.

The flight was long (4 hours) but I slept through most of it, which was great. We landed in Austin and there were a bunch of people at baggage claim holding signs for “The Dennis Quaid Celebrity Weekend.” I tried to talk Ben into blowing off the Finals and staying in Austin for that, mainly because I was hoping Randy Quaid might show up.

After an hour on the road we got to San Antonio. The businesses up and down the highways all the way there had Spurs flags and signs posted. Their catchphrase is the forgettable “Go Spurs Go.” Why the extra go on the end?

We found our hotel downtown and settled in. Here is a list of everything I know about the city of San Antonio:

1) The name of the city is Spanish for Saint Anthony. Or maybe it’s Saint Antonio. Not really sure.

2) The only other time I visited San Antonio, our SLAM travel agent got me a discounted rate at a resort called La Cantera, which is actually about 20 minutes outside downtown San Antonio. It must be a really nice place because the first afternoon I was there, I was walking down a hallway and I bumped into Nazr Mohammed, who San Antonio had just traded for a week earlier. As nice as La Cantera was, I ended up holed up there and never even made it to the downtown area, so I missed The Riverwalk and The Alamo and all that stuff.

3) The first time I ever went to a Chipotle restaurant was in San Antonio. Changed my life.

4) The Alamo is where a really large battle was fought a long time ago. I’m not exactly sure how it all worked out, but I do know that we’re supposed to remember The Alamo. Not sure why.

5) The area around SBC Arena, where the Spurs play, is a little sketchy.

6) The Alamo does not have a basement.

And that’s about it. Even though San Antonio has a long, rich history and played a key role in the founding of the U.S., I know precious little. But then, I stopped taking U.S. history classes in college after History 202, which took me through 1865 and Lincoln, so I missed all The Alamo stuff. I think. It must have been after 1865. Or maybe I just wasn’t paying attention.

(ASIDE: That History 202 class I took at UGA was one of those huge classes they had a lot of at UGA that met in a gigantic auditorium and had about 350 people in the class. I don’t remember the Professor’s name but I do recall him having a gigantic head, maybe the biggest head I’ve ever seen on a human. One day my friend Mike and I were walking into the class and it started snowing outside. Mike was carrying a Snickers bar, and we fantasized about what would happen if the snow turned into a blizzard and all 350 of us were trapped in the auditorium for a few days with just Mike’s Snickers to eat. Then we realized that if we needed to, the entire class could easily survive off our professor’s head for about three to four weeks. Also, about three years ago my friend Mike called me one afternoon and said he saw that same professor giving a history lecture on C-Span. Mike said the guy still had a tremendous head.)

In fact, the one actual fact I know about The Alamo — or at least I think I know — comes from one of the great movies of my youth, Pee Wee’s Big Adventure. Remember that? Dud’s bike gets stolen and he is told his bike can be found in the basement of The Alamo. He goes all the way to San Antonio only to discover The Alamo has no basement. So I assume it doesn’t have a basement. But what do I know? I guess that could have been a plot device invented purely for narrative reasons. But I like to think The Alamo doesn’t have a basement. I’m planning on finding out at some point this weekend.

After we dropped off our luggage we headed out to the Riverwalk to get something to eat. The Riverwalk is a small river that runs right through downtown San Antonio. It is green, and Mark Cuban once said it was dirty. I don’t know if its dirty in the sense that there’s trash in it, but it is definitely dirty in the sense that we immediately got lost. It’s not so much a river as it is a series of tributaries which all run together. Ten minutes after we started walking we were covered in sweat. And then, as if in a nightmare, Bob Sura came walking past us wearing an abnormally tight tank-top. Normally I would’ve taken the opportunity to thank him for screwing up the Hawks chances at drafting Dwight Howard by posting all those triple-doubles a few years back, but I was too dehydrated so I let him go.

We finally found a Mexican restaurant and sat down to eat right on the edge of the river. These long flat boats loaded with tourists came by every so often, gently putting along as the guides spoke softly. I told Ben if I was in charge of The Riverwalk, I’d install explosions under the water and fake banditos along the way to spice things up.

Anyway, got back to the room about 15 minutes ago. Gonna head out for the game tonight in a few. Completely random preiction: Michael Finley is going to go off tonight. Just a feeling. Be back later with game notes…